Colin Korovin’s art from the heart

“Art comes from the heart. Don’t be afraid to express yourself.” This is the mantra of Colin Korovin, an artist whose work contains strong, recurrent themes of peace, hope, respect, trust and love. He prefers to focus on the good in the world. 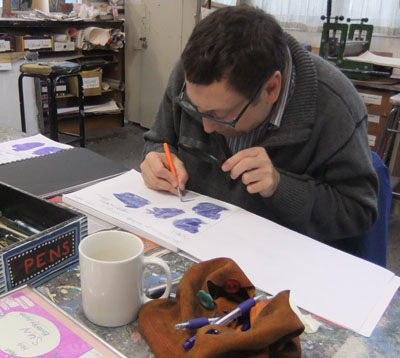 “Art is my passion and I want to share it with others,” Colin says, as he works on his latest sketch at Vincents Art Workshop in downtown Wellington.

As a teenager, he started sketching using ballpoint pens and is now a full-time artist at Vincents.

Back in 1992, Colin recalls, he looked up the phone book for a place where he could go and do art. He chose Vincents Art Workshop because he liked the reference to the artist Vincent Van Gogh. He’s been a part of the creative space since then. “Vincents is like family to me. It’s a lovely place.”

Colin started drawing without anyone showing him how to draw. He mainly uses ballpoint pens and occasionally works with paint. His earlier works were on A4 sheets of paper but now he uses journals to create his art.

His sketches are often based on news and events that have caught his eye in newspapers or magazines. Each drawing is detailed and informative. Colin is specific about how he creates his art. “First, I give it a title. Then I write my name, the date, day, year and the season. Then I begin my sketching.” 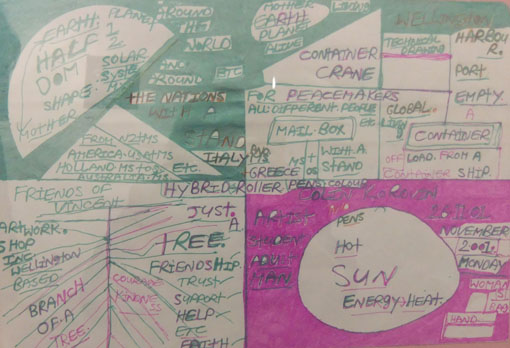 Colin’s twinkling eyes belie his artistic intensity. Sitting at his favourite table in Vincents’ main studio, Colin works steadily on the latest sketch in his journal, using various pens from his well-worn brown satchel and a magnifying glass for detailed work.

Glen McDonald, Co-ordinator at Vincents, has known Colin for more than 20 years. “Colin is very focused on his work and often finishes one sketch and begins his next one straightaway.

Driven to do art

“He’s driven to do his art. He has filled hundreds of journals with his works. Yet every single page is different and original. Many people love his journals.”

As for Colin, he says he likes to be occupied. “I don’t like to sit around and do nothing. Sometimes, I like to be left alone to do my art. At other times, I like to associate with people and talk with them about the news and what’s happening around the world.” 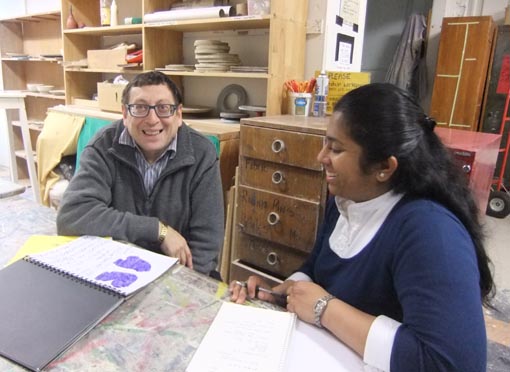 Vincents is at the centre of Colin’s world. He works there four days a week, and is often the first person to arrive. “Vincents is full of caring people. It celebrates differences and allows everybody to do art in their own way, and be recognised as artists.”

Colin is also an artist representative on Vincents’ committee and takes an active interest in its plans and progress.

Colin is excited about his upcoming exhibition opening at Vincents Gallery on 3 July. It will be a display of recent works by Colin and Carol Harkness, another Vincents artist.

Over the years, Colin's work has featured in many exhibitions and he says he is grateful to Stuart Shepherd, a curator and dealer, for promoting his art, both in New Zealand and internationally.

Colin was one of several New Zealand artists whose work was shown at the 2009 New York Outsider Art Fair. His work was also shown at the Fountain Art Fair in New York, the Galerie Impaire in Paris and the Creative Growth Centre in Oakland, California in 2010. An Italian art dealer has also bought several of his sketchbooks. 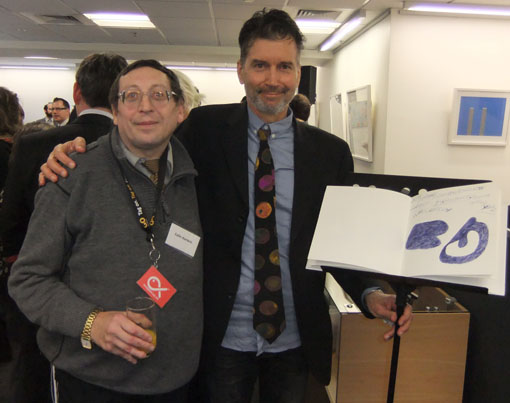 “At my exhibitions, people ask me if this is a child’s art but I tell them it’s not. Children could do this too but they would have a mother or a teacher to guide them. For me, I do it on my own. I just pick up a pen and a paper and draw what I want to draw, and it’s my art.”

Glen admires Colin’s commitment to art. “Colin’s most valuable contribution is his passion for art and for Vincents. He never gives up, even with failing eyesight and arthritis. He inspires me to work harder to improve Vincents, to make it a better facility for Colin and other artists.”