Touch tour is free to attend, tickets to audio described performance are $20 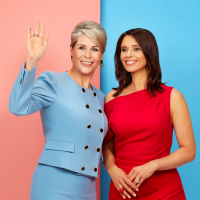 About Two Ladies: the women behind the most powerful men in the world take centre stage.

Two Ladies catapults two dynamic women into a high-tension global crisis. While their husbands, the Presidents of the United States of America and France, cross diplomatic swords, the real fireworks are down the hall, where bloodied Sophia and world-weary Hélène are trapped together, distrustful of their husbands and each other.

Resemblances to Melania Trump and Brigitte Macron are more than coincidental but, in the hands of prize-winning Irish playwright Nancy Harris, that’s merely a starting point for this deliciously deceitful pressure-cooker drama.

Two Ladies grapples with big issues and petty grievances as Sophia and Hélène attempt to prove to the world that they are capable of far more than anyone imagines.

Fresh from its 2019 world premiere in London, this fiendishly fashionable tour de force pits Jennifer Ward-Lealand against Anna Jullienne and features Rena Owen (Once Were Warriors) in a rare stage appearance as the American First Lady’s tough-talking press secretary.

Adam Gardiner and Ban Abdul complete the stellar cast in this unforgettable evening of high-octane performances and unexpected dramatic twists.

Please call the Auckland Theatre Company box office on 0800 282 849 or email boxoffice@atc.co.nz to book tickets to the audio described performance and reserve a place on the free touch tour. Tickets for the audio described performance are $20. You may purchase one companion ticket for $20. If you would like additional tickets for friends or family, we will do our best to seat them with you.

+ Text Size -
Do NOT follow this link or you will be banned from the site! Original generation time 2.8762 seconds. Cache Loaded in: 0.0006 seconds.