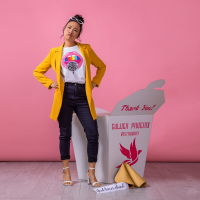 Meet Pearl Wong. She’s a first-generation Chinese immigrant and a single mother who’s barely keeping her restaurant, Golden Phoenix, afloat. Meanwhile, her older daughter Zoe has moved back home and her teenage daughter Mei is kicking back against her cultural heritage. With the Wongs on the ropes and an ominous secret hanging over their heads, will Pearl’s indomitable willpower – and the healing power of karaoke – be enough to hold the family together?

Michelle Law is an award-winning Chinese-Australian writer and actor who has become a sensation across the Tasman. Single Asian Female has played to sell-out crowds and received glowing reviews for its winning blend of lived authenticity, cutting humour, wrenching tragedy and singalong bliss.

For everyone who’s struggled to belong, to hold a family together or to get through tough times with a smile on your face. Don't miss the New Zealand premiere of Law’s bracing, bawdy knockout debut.

+ Text Size -
Do NOT follow this link or you will be banned from the site! Original generation time 1.8101 seconds. Cache Loaded in: 0.0004 seconds.