The Life of Galileo: audio described and touch rour 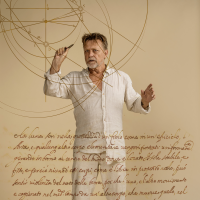 About The Life of Galileo:

Meet the man who rocked the world.

It may have been more than 400 years since the Roman Inquisition challenged Galileo Galilei’s proof that the Earth rotated around the sun but, sadly, the story of arrogant leaders refusing to accept the findings of science is all too timely.

Leading the large ensemble, Kiwi acting legend Michael Hurst is well equipped to embody the contradictions, flaws and genius of Galileo: a man who looked to the stars, risked heresy and changed how we see the heavens but, also, a man who was naive, ambitious, idealistic and capable of petty cruelty.

The Life of Galileo promises a night of bold ideas, brilliant theatricality, and a full-throated defence of speaking truth to power.

+ Text Size -
Do NOT follow this link or you will be banned from the site! Original generation time 2.8848 seconds. Cache Loaded in: 0.0004 seconds.