“Disabled people can and should be able to participate in the arts as creators, audience members, and gallery and museum visitors. These workshops have opened up possibilities for the participants to be effective advocates,” says Richard Benge, Executive Director of Arts Access Aotearoa.

Arts Access Aotearoa developed and presented a series of workshops in Auckland in 2013 and in Christchurch in 2014. These workshops were aimed at building leadership skills and providing effective ways for disabled people to advocate for improved access to the arts.

A feature of the workshops, particularly in Auckland, was that most of the sessions were held in different venues so that participants could provide feedback on the venue's accessibility.

The 2013 Census statistics show that one in four New Zealanders (24%) identifies as having a disability - an increase in large part attributed to an ageing population in New Zealand.

“These findings reinforce the work we’ve been doing with arts and cultural organisations and venues over the past four years to help them improve their access for disabled people,” Richard says.

The workshops were made possible with funding through the Ministry of Social Development's Making A Difference Fund.

"The members were driven by a desire for improved access and participation in arts and advocacy," Prudence says. "Some were artists, performers or people who love the arts; some were all three.

"They were able to share insights and experiences, and engage with arts venues and key people in the sector to promote inclusion and two-way engagement."

Read more about the Christchurch workshops.

The organisations hosted the visitors, conducted tours and listened to participants’ feedback about the venue’s accessibility. The workshops also included guest speakers and group discussions. 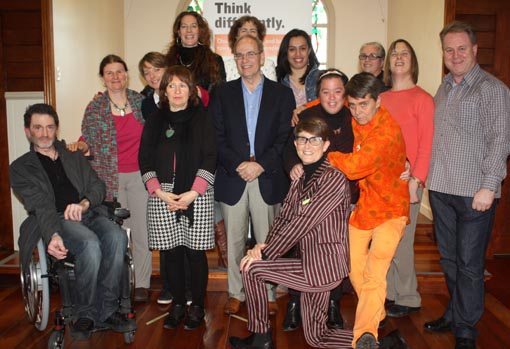 “Coming together and sharing our knowledge and experience has provided us with a powerful base to continue our advocacy,” Allyson says. “We quickly worked out there is no single solution to improving access to the arts. The discussions we had at the workshop sessions were very meaningful and often, we weren’t quite ready to end them and go home.”

The workshops culminated on 22 June when Auckland Mayor Len Brown presented the dozen participants with certificates acknowledging they had completed the five one-day workshops.

“Our arts and entertainment venues and cultural events need to be accessible for all people to enjoy,” the Mayor said. “I congratulate the Arts Access Aotearoa advocates for their efforts to make sure Auckland becomes a more inclusive city.”

Read more about the Auckland advocates.

Following the workshops, a group was formed to continue the arts advocacy work. Called Creative Deviants, the group is facilitated by Philip Patston.

The group works with arts organisations to:

To read more about Creative Deviants and its projects, visit its website.