Quilt a symbol of prisoners’ achievements 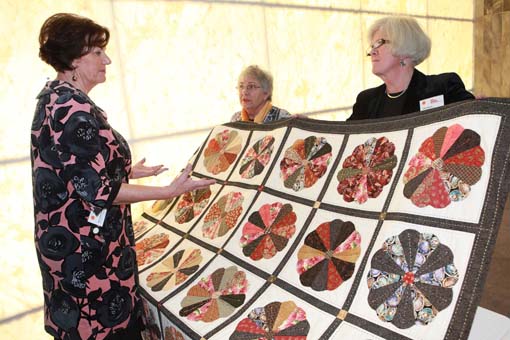 By Janelle Cheesman
A large quilt created by prisoners at Auckland Region Women’s Corrections Facility has made a journey from the facility to Parliament, where it has become a part of its art collection and a symbol of the women’s achievements. 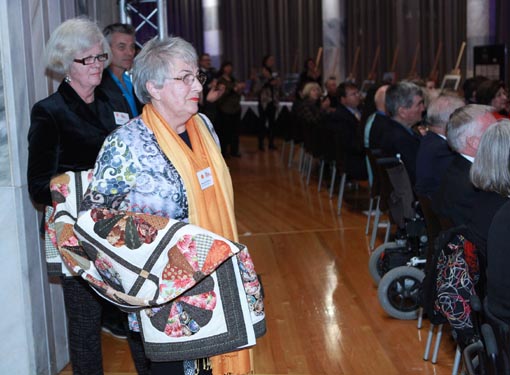 Accepting the quilt, Minister Finlayson said it carried an important message about unity and represented the empowerment of women.

“When this quilt is displayed, it will carry a positive message about women helping other women rebuild their lives through creativity and training in the traditional craft of quilting.”

The Quilt-Stitch Group is made up of a dozen volunteer quilters who have been sharing their skills with prisoners in Auckland Region Women’s Correction Facility for the past seven years – a commitment that was recognised last year when they received Arts Access Aotearoa’s Big ‘A’ Prison Arts Community Award. 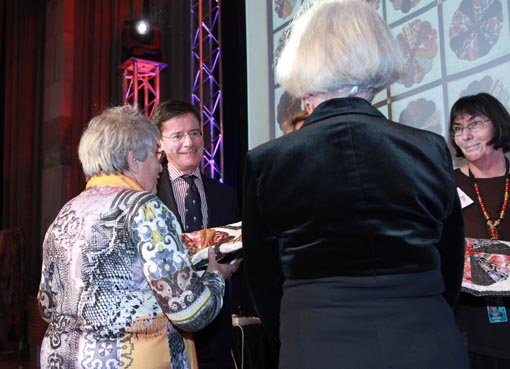 Team leader Mary Ann says the group is about women working together and sharing skills that can help the prisoners’ rehabilitation process and support their reintegration back into the community on release.

“Our aim is to improve the women’s literacy and numeracy, and bring a touch of the outside world into the prison through quilting,” she says. “We gear our projects towards ensuring that all the women we work with succeed in what they do.”

Feedback from the prisoners includes:

Back in 2008, Mary Ann found 30 pieces of a quilt in a cupboard at Auckland Region Women’s Corrections Facility. “The pieces had been made by women for a community quilt that had never been stitched up. Some of us got together and stitched up the blocks into a quilt. The fine-tuning was done by us but the work was done by the prisoners.”

The quilt comprises 30 individual circular flower forms, each made up of petal or leaf-shaped pieces and set in squares called blocks. The pattern is a heritage pattern called Dresden Plate – named after the design Dresden Plate, a crockery design from the early nineteenth century.

When the quilt was completed, it was hung in the reception area at the Auckland Region Women’s Corrections Facility. Then in late 2012, it was one of the works displayed in Arts Access Aotearoa’s exhibition of prisoner art in Parliament House.

Greatly admired by visitors to Parliament

Following the exhibition, the Parliamentary Artworks Committee agreed to purchase the quilt. Michelle Janse, Parliament’s Displays and Collection Co-ordinator, says the quilt was greatly admired by visitors to the exhibition.

“The exhibition was very well-received and everything on show was high-quality art,” Michelle says. “Feedback I received about the quilt was that it was a very fine example of a traditional-style quilt.” 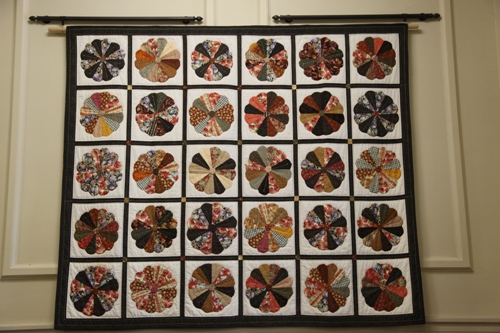 The Parliamentary Artworks Committee supported the purchase of the quilt for several reasons.

“Firstly, they were impressed by the quality of the work. Then there was the context in which it was made and the effort that has gone into making it. Finally, the quilt had already been exhibited and admired in Parliament.”

Initially, she says, the quilt was hung behind the reception desk in the foyer of Parliament House – the same place where it hung in the exhibition. It will also be included in textile displays.

The prisoners feel a huge sense of achievement when they complete a quilt, usually for family members or friends, Mary Ann says. “When they start a project, they are amazed at what they can achieve. The improvement in self-esteem is gradual but very apparent.”

Mary Ann says that the Quilt-Stitch Group will continue its work at Auckland Region Women’s Corrections Facility to help prisoners learn new skills and prepare them for a fresh start.

Funds from the sale of the quilt will be used to buy material and equipment such as sewing machines, supplementing the donations made to the Quilt-Stitch Group by quilters from all around New Zealand.