24 November, 2010 The Attitude Awards, known for recognising the incredible achievements of people with disabilities, are giving non-human go-getters a chance to shine too. 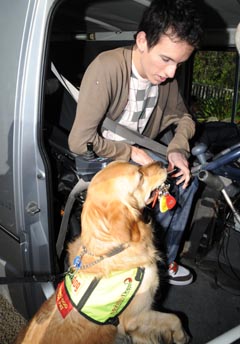 Mobility dog ambassador Chance will take centre stage when he delivers each award to host Simon Dallow at the Eden Park black tie event on December 1.

Chance is a four and half year old golden retriever who has his own physical disability. He was diagnosed with a growth deformity in his left front leg three years ago and needed surgery. This prevented him from continuing his training as a mobility dog and instead Chance became the face of the Mobility Assistance Dogs Trust.

For the last three years Chance has been making public appearances with trainer Helen Spence and is used to being on stage.

“I’m currently working with Chance to get him ready to deliver the Attitude Awards in a kete basket,” says Helen.

“He’ll be on stage up to six times on the night and delivering each one to Simon Dallow who will be armed with a fair share of dog treats.”

The three finalists in the artistic achievement category of this year’s awards are Andrew Blythe, Celeste Strewe and Susan King. Read earlier story.