Getting prisoners' art into communities 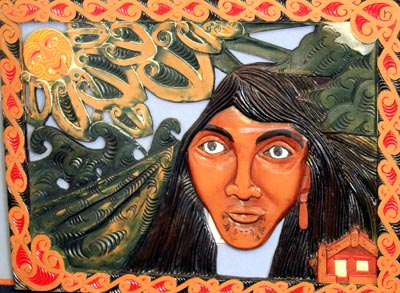 “These were the only carved works I saw even though a substantial amount of carving is undertaken at the unit,” Moana says.

“Our focus is to get the prisoners’ artworks out into the communities where there are already connections with the men through their whānau,” he explains.

That focus is directed into schools, kindergartens, kohanga reo and sports organisations – particularly in Camberly, Flaxmere and Maraenui, where many of the prisoners’ whānau live. 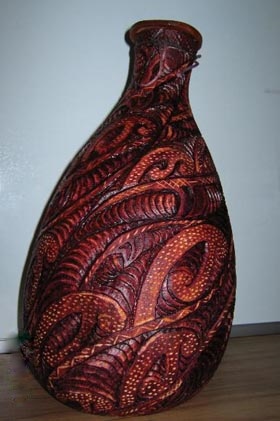 “These days, we’re completing a project for the community every two weeks,” Lawrence says.

Communities are often overwhelmed by the artworks that are either gifted or commissioned. These range from bone carvings and weaving to carved and painted works on MDF board, and larger carved pou. Works might be for awards at local wānanga and schools; carved works for kindergartens and kohanga reo; or more strategic pieces for public places.

“This year, we’re concentrating on prize-giving work for schools, and pieces for hospices, hospitals and old people’s homes,” Lawrence says.

Gifting taonga to communities is important for Te Whare Tirohanga Māori. Works that go to places where prisoners’ whānau live uplift the mana of the whānau as well as the prisoners who make the work.

Being part of the community

“It gives them a sense of being part of the community in a positive way prior to their release,” Lawrence explains. “When the work is presented to the community, I ensure that staff are in uniform. It fosters the relationship between Corrections and our communities in a positive light.”

In March 2011, a large carved and painted work Nga Hau e Wha (the four winds) was commissioned by Probation Services to adorn its new building in Flaxmere.

The work itself played an unexpected role in settling the community, Lawrence says. Flaxmere residents had been concerned their community would be adversely affected by having the new building and its services in their neighborhood. But residents began to feel more relaxed when they saw the prisoners’ two-metre-high work alongside the new building.

The tikanga of the carvings were aligned with the land, its history, the purpose of the building, and the people of different cultures whose lives would be directed from within its walls.

A mauri stone for the work was sourced from the bed of Te Awa o Te Atua, a river that ran through Flaxmere hundreds of years ago. It was seen to give the site a life force and protection.

In the past year, the Māori Focus Unit has encouraged men to take up the therapeutic benefits of weaving with raranga practitioner Wiki Turner. They do this through the unit’s compulsory tikanga programmes. 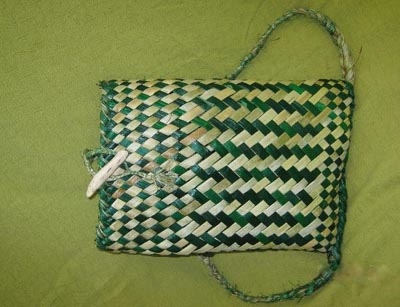 At first, the prisoners baulked at the idea because they saw weaving as women’s work. But it didn’t take long for that thinking to change, Lawrence says.

At the moment, the unit has between six to eight main weavers.

“The personal development that occurs for prisoners in these classes is immediate,” Lawrence says. “They engage, they’re attentive. They want to have karakia and get started. They are able to take harakeke back into their rooms and continue to work, and we are strong in our support of that.”