A young former refugee turned writer, poet and musician, a pioneering Hutt Valley prison arts tutor, a New Plymouth art gallery, a partnership between a North Shore arts centre and the Department of Corrections, and a creative space providing an artistic outlet for people in Masterton were recognised tonight at the Big 'A' Awards 2011, presented at Parliament by Arts Access Aotearoa. 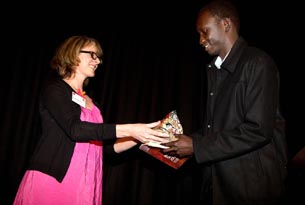 The Big ‘A’ Awards 2011 were hosted by the Hon. Christopher Finlayson, Minister of Arts, Culture and Heritage, in the Banquet Hall of Parliament. The five recipients are:

•    King Street Artworks, Masterton, awarded the Big ‘A’ Creative Space Award 2011 for its outstanding contribution in providing opportunities for people with limited access to make art

•    Mairangi Arts Centre, North Shore, and the Department of Corrections, awarded the Big ‘A’ Community Partnership Award 2011, recognising an outstanding partnership that has presented and promoted art by prisoners in community settings

•    Sharon Hall of The Learning Connexion, Hutt Valley, awarded the Big ‘A’ Prison Arts Leadership Award 2011 for her outstanding contribution in supporting the rehabilitation of prisoners through the arts

•    Makuei Aken, an Upper Hutt resident from Southern Sudan, awarded the Big ‘A’ Winton and Margaret Bear Young Artist Award 2011, recognising a talented young artist in the Greater Wellington region who has faced barriers in pursuing his artistic potential

•    Govett-Brewster Art Gallery, New Plymouth, awarded the Big ‘A’ Creative New Zealand Arts For All Award 2011 for developing its audience by going to extraordinary lengths to become more accessible to the disabled community. 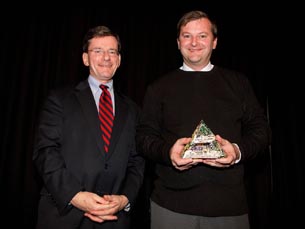 The annual Big ‘A’ Awards are the only national awards in New Zealand celebrating the outstanding achievements of individuals and organisations providing opportunities for people with limited access to engage with the arts as artists and audience members. They also recognise a talented young artist who faces barriers in pursuing his/her artistic career.

“We are living in challenging times but the arts continue to offer a window to self-expression and creativity, lifting our spirits and connecting us to our communities,” he said. 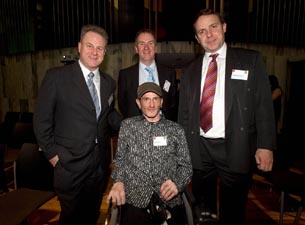 The judges described the experience as enjoyable, challenging and enlightening.

“All those nominated deserve recognition for providing opportunities for people to create and experience the arts. There was a real celebration of diversity and artistic endeavour among the nominations, and we read about some great work being done throughout New Zealand to meet people’s need for creative expression.” 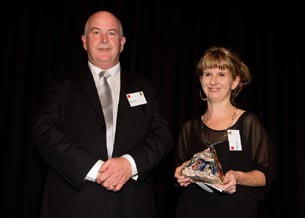 The evening also featured performances by NgÄ Maioha o Rangikauia and Auckland song poet Caitlin Smith. Artwork by creative spaces and by prisoners studying visual arts through The Learning Connexion in the Hutt Valley was on display.