Artworks and carvings created by men in Te Whare Tirohanga Māori, the Māori Focus Unit at Hawke’s Bay Regional Prison, are gifted to schools, marae and other organisations in the community every couple of weeks. 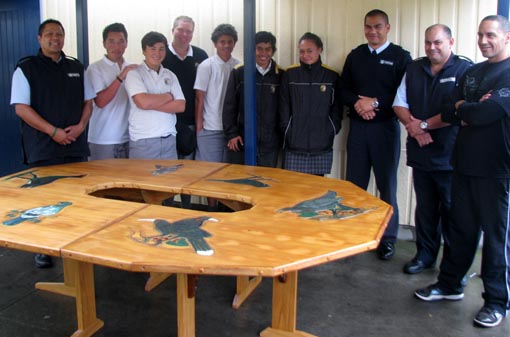 “We’re always looking at ideas and initiatives to support the community,” says Lawrence Ereatara, Principal Corrections Officer. “When the men are released they return to their respective communities.

“A number of the men’s tamariki and mokopuna attend local schools. By gifting taonga to the schools and community organisations, we’re strengthening our relationships, assisting in reintegration, and opening up possibilities for future community support and opportunities.”

Earlier this year, for instance, Lawrence and some of his staff arrived at Flaxmere College and presented the school with a carved meeting table, a taiaha (spear), koikoi (short spear) and heru (ornamental comb).

Enhancing the mana of the school

“We presented the table to the school, the koikoi and taiaha to the head boy and girl, and the heru to the school principal,” Lawrence says. “Our aim was to uplift and enhance the mana of the school, the students and the principal with strong leadership and future direction.” 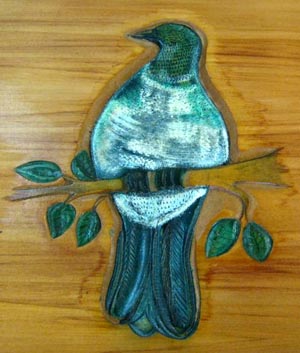 Flaxmere College principal Louise Anaru says the school was “overwhelmed and honoured” to receive the taonga.

“The kōrero tuku iho (history) behind the pieces means so much to all of us. It was a heart-warming and spiritual experience, which inspired our students,” she says.

There are 60 men in Te Whare Tirohanga Māori, all involved in tikanga programmes. They specialise in different areas, including bone and wood carving, flax weaving and painting. It is one of five Maori Focus Units in prisons around the country. Their aim is to reduce the risk of re-offending by helping prisoners understand and value their Māori culture.

Lawrence says the men take pride in creating beautifully crafted and often intricate work. “Knowing they are giving back to the community gives them a real sense of pride.”

The men create work that reflects a particular kaupapa, and acknowledges their Māori heritage, their whakapapa.

“With Flaxmere College, I gave the kaupapa to the carvers and we looked at certain taonga. So, for example, the taiaha and koikoi represent the challenges and the need to stand strong, while the heru represents wahine toa, encompassing love, nurturing, mana and respect.”

Some of the work created by the prisoners is commissioned; some is gifted. It might be work for awards at local wānanga and schools; carved works at kohanga reo and kindergartens; or large pieces for public places such as hospitals and hospices.

Other local schools to benefit recently from the gifting of work are Richmond School in Napier and Twyford School in Hastings. The Richmond School carvings depict the story of kaitiaki Moremore, son of Pania of the Reef, who was seen in many forms overseeing and protecting the rivers and coastline.

The Twyford School carvings are based around the tau ihu and tau rapa of a waka. They depict the blending of cultures in today's world, the kōrero that comes down from the heavens, and life’s journey.

Explaining the history behind work

“When the work is presented to the community, there is a formal handover process,” Lawrence explains. “I ensure staff are in uniform, and we explain the history and kōrero behind the work. It helps to foster the relationship between Corrections and the community.”

It also helps break down barriers for the men when they are released back into the community.

“A lot of the men are broken and introverted when they come into the unit and the work we do with them brings them out of themselves. Knowing their work is very visible and appreciated by the community is a great source of pride for them. And any photos and letters of appreciation from the community can be added to their CVs.”