4 February 2020
Lily Harper and her friends are proud to present Up Down Girl from 28 February to 1 March at The Globe Theatre in Palmerston North. In this new, local adaptation, based on the British play ‘Up Down Boy’ by Sue Shields, Lily draws on her own life experiences to tell the tale of 19 year old Mattie Baker as she prepares to leave for college. 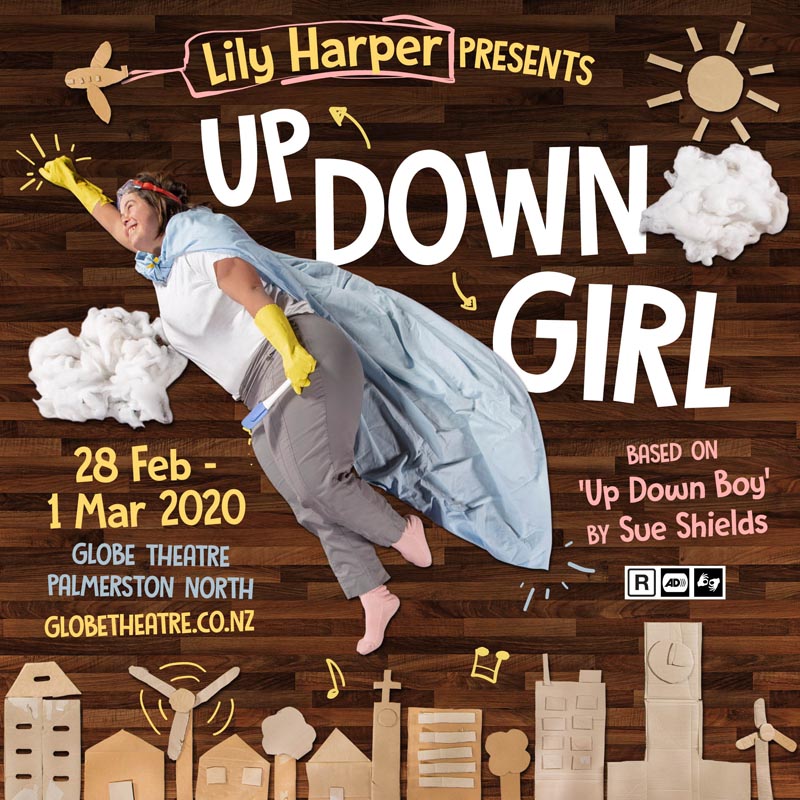 Up Down Girl is a funny and uplifting play about a young woman growing up with Down syndrome, and the mother who raised her. Hilarious and heart-warming stories from Mattie’s childhood are interlaced with songs, dances and drama skits as the audience gets the opportunity to enter the wild and colourful imagination of Mattie and, by extension, Lily herself.

“There aren’t many movies or plays that have people with Down syndrome in them, and in the ones that do, they are usually smaller roles,” says Lily. “I want to be the star of the show.”

Lily met producer and director Nathan Mudge when he started running the performance company for people with intellectual disabilities that she is part of. The pair quickly built a good rapport so it wasn’t long before they started planning a show that would give Lily the chance to shine.

“As soon as we met, I was instantly caught by her unique perspective of the world and natural talent for performing,” says Nathan. “She has an incredibly positive attitude towards life that is so joyous to be around, and I can’t wait to share that with everyone who comes to the show.”

With Lily and Nathan, award-winning actor Trudy Pearson takes on the role of Mattie’s mother. Michiel van Echten will co-direct and feature as one of Lily’s “imaginary” friends, along with Mycah Keall who is in her final year of a Performing Arts degree at Te Auaha in Wellington. Professional designers Ian Harman and Natala Gwiazdzinski have also come on board.

The show will be fully accessible to Manawatu’s disability community, the first of its kind in the region. There will be a relaxed performance on Friday 28 February for those who will benefit from a more relaxed performance environment, including people with an Autism Spectrum Condition, sensory and communication disorders or a learning difficulty. There will be a fully accessible performance with audio description and sign interpretation on Sunday 1 March for those who are Blind or low vision, or Deaf or hard of hearing. “Theatre is for everyone,” Nathan reminds us. “I hope Up Down Girl inspires venues and producers to make a conscious effort to include people of all abilities, on stage and off.”

Up Down Girl plays on 28 and 29 February at 6:30pm, and 1 March at 4pm, at The Globe Theatre, 312 Main Street, Palmerston North. For more information and to book, visit globetheatre.co.nz. People with accessibility requirements should contact The Globe Theatre directly.