11 August 2016
Anyone who knows Gisborne artist David Cameron (Ngatapa, Gisborne, Kati Mamoe, Ngai Tahu, Te Whānau a Kai, Te Aitanga-a-Mahaki, Ngati Porou) will describe him as an exceptionally talented but humble man. Paraplegic and a wheelchair user since 1977, he is proof there are no limitations for a creative soul. 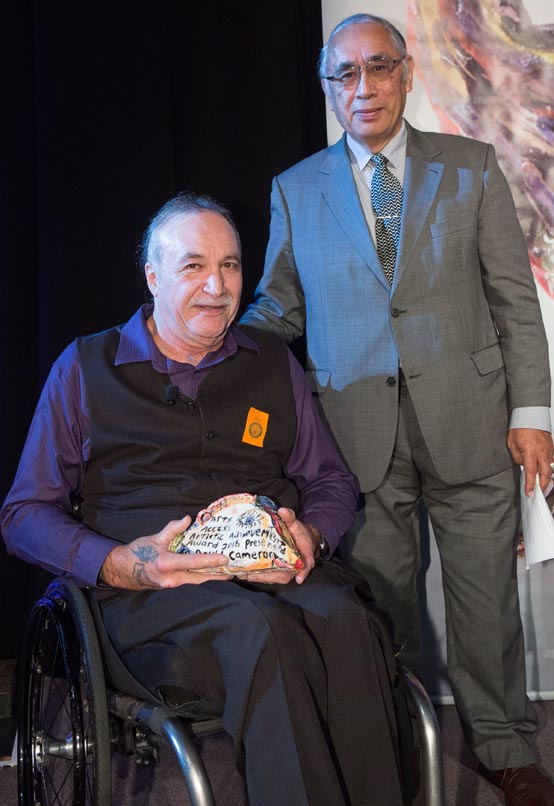 A fall from a balcony when he was 19 left David paralysed. During his rehabilitation, his passion for art was rekindled. He taught himself to carve leather and today, he is a recognised leather worker, painter, ceramicist, and tutor in his preferred artform, uku (clay ceramics).

“When I left school, I was more focused on working and earning money than being an artist. Art was always with me since I was young and it manifested itself after I became paralysed,” says the recipient of the Arts Access Artistic Achievement Award 2016.

Guided in uku by ceramic artists Baye Riddell, Wi Taepa, and the late Manos Nathan and Colleen Waata-Urlich, David is acknowledged nationally as a senior ceramic artist and a mentor for emerging ceramicists.

He is also a member of Kaihanga Uku (Māori Clay Artists Collective), a network engaging with indigenous artists in the Pacific Rim and globally. 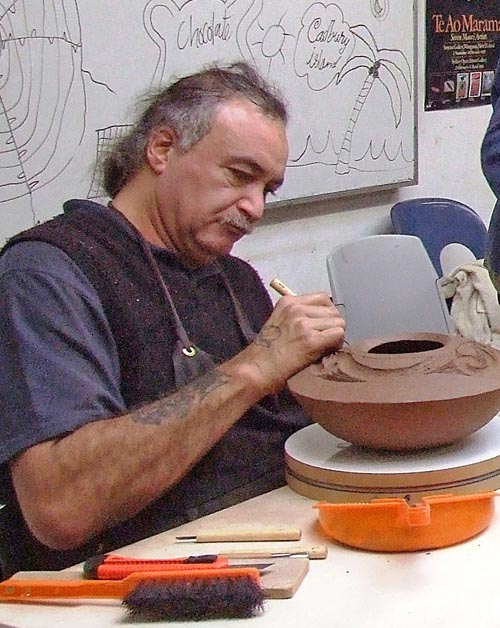 “I love the immediacy of uku – taking a lump of clay and modeling it into a living, beautiful form. I also enjoy the challenges and delights of this malleable material, which sometimes has a mind of its own.”

In 1995, David was asked to paint the kowhaiwhai in the newly constructed wharenui (whare-tipuna) Te Poho o Hiraina at Pakowhai Marae, Waituhi, in Gisborne. Initially, he says, he felt apprehensive about taking on the role – mainly because he thought he did not whakapapa to the whare and marae.

“But once I learned my whakapapa (genealogy) and started painting the house, I saw it was appropriate and natural for me to do so,” he says.

From September 1997 and over the next 12 years, David worked on this assignment. Studying from 2004 to 2007 at Toihoukura, Tairawhiti Polytechnic, he did not mention it to any of his tutors or fellow students until the wharenui was completed.

The result was “spectacular”, as Māori King Tuheitia Paki said at the opening ceremony in 2009. 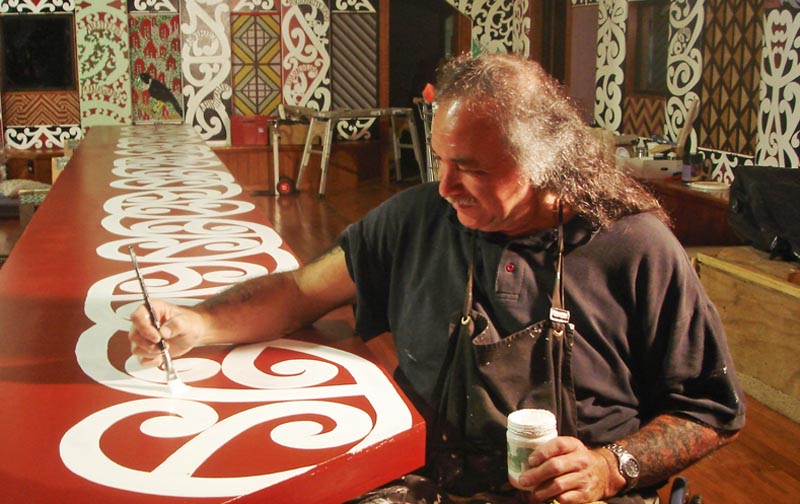 It’s this work on the wharenui that he’s most proud of. “It was a lot of work over 12 years but the opportunity I was given to work on a project that represents the pinnacle of Māori artistic expression has been an honour and a privilege.”

The judges of the Arts Access Artistic Achievement Award 2016 said that David’s decoration of the wharenui Te Poho o Hiraina has brought huge mana to David and his community. “His commitment, passion, achievements and contribution to mahi toi shine like a beacon across Aotearoa New Zealand.”

In 2007, David completed a Diploma in Visual Arts and Design and was top student, receiving the Ruanuku Mueseum Acquisition Award. He went on to study for a Bachelor of Visual Arts-Te Toi o Nga Rangi at Toihoukura (School of Māori Visual Art and Design), majoring in clay. He completed his degree in 2010.

The guidance of Baye Riddell

David says his study exposed him to the arts community and nurtured his contemporary artistic expression. It was here that he worked under the guidance of Baye Riddell, a pioneer in the development of the contemporary Māori art of uku.

“Until I met Baye in 2004, I saw myself as a painter. I remember being amazed at the speed he was able to create the form of a pot,” he says. “At Toihoukura, I worked with established contemporary artists such as Derek Lardelli, Steve Gibbs, Fred Graham and Tina Wirehana. It really opened my eyes to contemporary Māori art.”

Baye Riddell says David is an inspiration to many people. “I’ve never once heard him complain despite the many physical challenges he’s faced over the years. Instead, he continues to challenge himself to further his arts disciplines and pass on his skills to others.”

Since 2007, David has exhibited his work as a member of Kaihanga Uku. His work is also on display and for sale at Pataka Art + Museum in Porirua.

“My main goal is to continue working with clay,” he says. “Every day I get new ideas and I want to keep challenging myself so that my work evolves. I also want to explore the use of kowhaiwhai patterns in my work.”