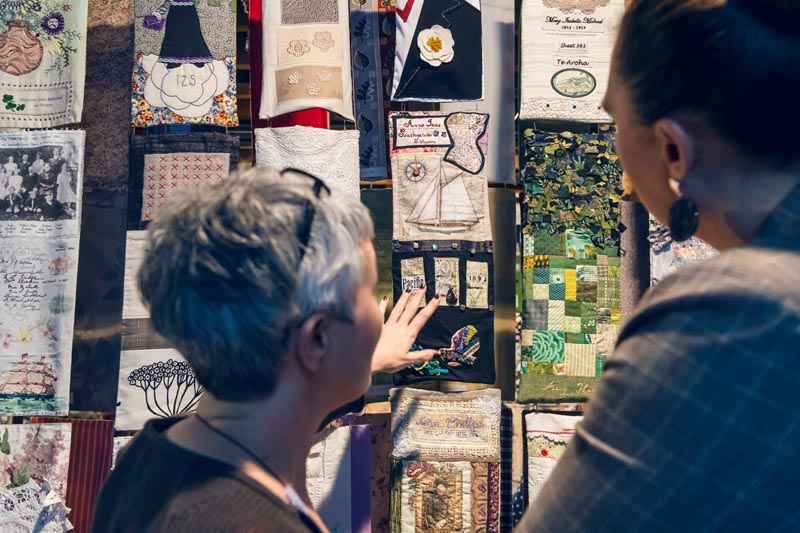 10 December 2019
Suffrage in Stitches, a 300-metre textile work created during the 125th anniversary year of women’s suffrage in New Zealand, re-opened in the Flux space of Wellington Museum on 10 December 2019 and will continue until 27 April 2020.

The final work matches the length of the suffrage petition, signed by 31,872 women and presented to Parliament in 1893. It consists of 546 individually designed fabric panels, representing the number of pages in the petition and including the names of 546 women.

Together, the panels tell the stories of those who signed the petition and the subsequent generations. It is made from recycled materials and more than 27,000 individual stitches – one stitch for each signature on the petition that still exists, all done by hand.

The project was devised by Caroline O’Reilly, the co-ordinator at Vinnies Re Sew, and ran in partnership with Wellington Museum.

Vinnies Re Sew is a sewing space funded by St Vincent de Paul in Wellington. Its projects create social and economic opportunities for people in the community, It takes discarded clothing and textiles that aren’t sold in St Vincent de Paul op shops and upskills people to turn them into new products, repairing them for resale or passing them on to community group projects.

“I started the Suffrage in Stitches in September last year so that anyone could hang their work in a gallery regardless of their educational background,” Caroline says. “As a result we have makers from diverse cultural backgrounds, locations around New Zealand, ages, educational and skill levels.”

Through the Suffrage in Stitches project, makers have made new connections and rekindled old ones. “This was a superb initiative to be part of. The Facebook page showed other people's progress and was encouraging if working alone. It shows you can be part of something even if you live in a different town.”

You can search and learn about each panel and the maker behind the work on the Suffrage in Stitches blog.

+ Text Size -
Do NOT follow this link or you will be banned from the site! Original generation time 2.2108 seconds. Cache Loaded in: 0.0005 seconds.