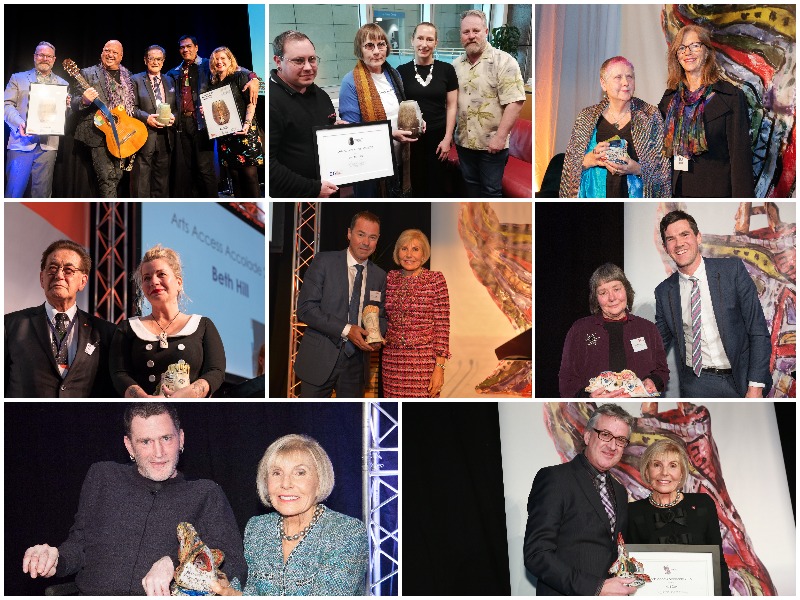 The Arts Access Accolade is presented annually at Te Putanga Toi Arts Access Awards. It was introduced in 2014 and the inaugural recipient was Philip Patston. Unlike the other awards, which are selected by a judging panel, the Accolade is selected by Arts Access Aotearoa's staff and board. It recognises a person who has inspired the Arts Access Aotearoa team and helped the organisation achieve its vision of a society where all people in New Zealand have access to the arts – someone we can’t imagine not having on board. Thank you for your outstanding work with us to improve access to the arts for everyone in this country.

Hone Fletcher and Lawrence Ereatara took different pathways to get to Hawkes Bay Regional Prison but they are travelling on the same pathway now, and they are confident that pathway will provide the way for the tāne they work with to leave the prison – and never return. Both men are steeped in te ao Māori and it's their deep knowledge that informs their work helping to implement the prison's Māori Pathways programme. Read more about Hone Fletcher and Lawrence Ereatara

“I can’t stand injustice and I can’t stand discrimination. It’s something you can’t just turn on and off. Once you know about it you have to keep on fighting to make things right,” says Robyn Hunt, recipient of the Arts Access Accolade 2019. The Accolade recognises the Wellingtonian’s long-standing commitment to human rights and advocacy for disabled people. It also recognises her unstinting support for Arts Access Aotearoa’s work. Read more about Robyn Hunt

The vision, hard work and resilience shown by Beth Hill of Redemption Arts and Education Services has seen Northland Region Corrections Facility build an arts programme considered the benchmark for other rehabilitation and reintegration arts programmes in New Zealand. Richard Benge, Executive Director, Arts Access Aotearoa, says: “Beth has been courageous in her collaborations with us and has taken many leaps of faith to make projects succeed beyond what we thought was possible.” Read more about Beth Hill

Supporting the community is a good way to build team work and get staff more engaged in what’s happening around them, says Olivier Lacoua, General Manager of CQ Hotels Wellington from 2013 to July 2017. He also points out that if you’re not accessible and opening your hotel doors to everyone, you are saying “no” to 24 per cent of the New Zealand population who are Deaf or live with a disability. Read more about Olivier Lacoua

2016: A name that spells inclusion

Glen McDonald has been working at Vincent Arts Workshop in Wellington for 23 years and says, “My heart is here.” Her commitment to the arts and inclusion dates back to when she was aged six or seven and she found herself wondering why some people were excluded from society because of their differences. This was the beginning of a life-long focus on human rights issues. Read more about Glen McDonald

“Our rebuilt Isaac Theatre Royal is receiving design and management awards but our efforts in the field of accessibility are not about bricks and  mortar. They are about our people. We will always strive hard to make our venue accessible for all of our thousands of patrons and endeavour to improve on what we have done,” says Neil Cox, Chief Executive of the Isaac Theatre Royal in Christchurch. Read more about Neil Cox

Philip Patston, a former comedian committed to social change, has always pushed boundaries in thinking. What most interests Philip is social change and looking at the world through different lenses. Why talk about disability, he asks, when you can talk about accessibility. “If we’re accessible then disability becomes almost irrelevant.” Read more about Philip Patston