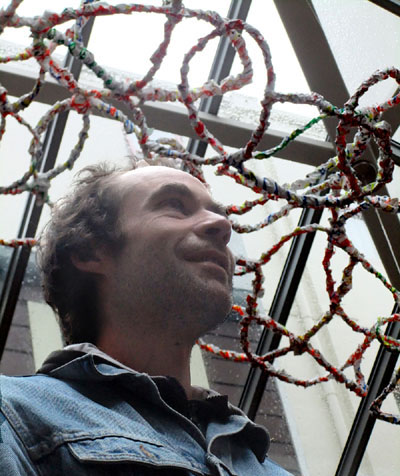 “I avoid straight lines,” Fraser says of the swirls and loops that make up the sculpture. “To me, framing a photo or artwork restricts the imagination and suggests captivity or ownership. I don’t frame my works because I want people to explore ideas and break out of the frame.”

Called Journey, the sculpture was commissioned by CQ Hotels Wellington after its General Manager, Olivier Lacoua, purchased one of Fraser’s earlier works, called Black Hole, when he saw it in an exhibition presented by the hotel last year.

“I wanted to give an opportunity to an artist in our local community and Fraser’s work stood out,” Olivier says. “This is an inspirational partnership between an artist, a business and the local community.”

With Journey, Fraser has used 100 metres of number 8 wire to form the structure of the work. He then wrapped the wire in paper, hardened it with Shellak varnish, and painted the swirls and loops in fluropaint.

"Something intriguing for visitors"

“The hotel lobby is a space with glass, steel and straight lines,” Fraser explains. “I wanted to soften the space and use the natural light to provide something intriguing for visitors.

“Olivier trusted my imagination and that made me feel confident in my ability to create something that would capture his vision.” 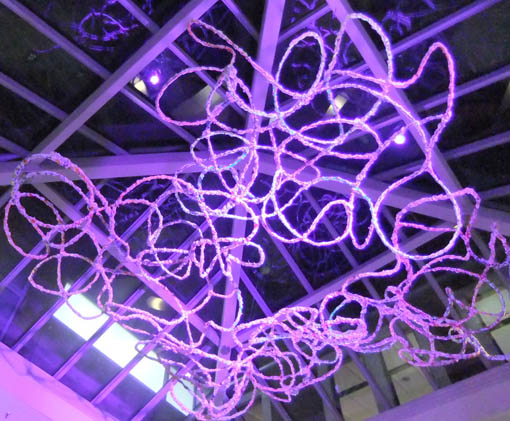 Fraser, who had only seen the work during the day, was pleased to see the reflections the work created at last night’s launch.

One of the guests was Lynne Trafford, Corporate Relationship Manager at The Salvation Army and a neighbour of CQ Hotels Wellington. “I like the work during the day but it has another dimension at night because you get a kaleidoscopic view in the ceiling glass.”

Fraser refined his creative talents at community art studios Vincents Art Workshop and Pablos Art Studios. In 2009, he sold his first piece for $15 at a group show in Vincents Gallery. 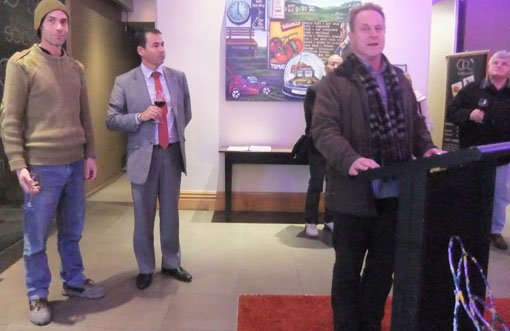 “That first sale started my journey and I’ve never looked back,” he says.

In 2011, Arts Access Aotearoa commissioned Fraser to create a permanent installation for its office in Toi Pōneke Arts Centre in Wellington. UP was the result.

Speaking at last night’s launch, Arts Access Aotearoa’s Executive Director, Richard Benge, said: “I’m very proud of Fraser, his talent and the steps he has taken to get to where he is tonight.”

Fraser’s vibrant 3D wall sculptures are in collections from Dunedin to Auckland and, recently, in England.