22 July 2014
By Caitlin McNaughton
An award-winning play telling the true story of a disabled sportsman will include for the first time a sign interpreted performance for Deaf audiences at the TSB Showplace in New Plymouth on Wednesday 23 July. 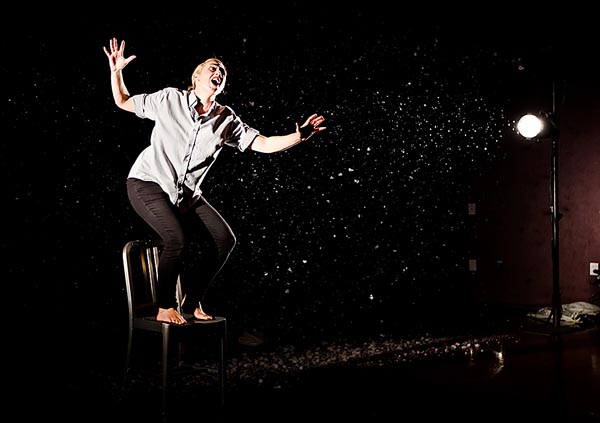 solo show Nick: An Accidental Hero was written and first performed by Renee Lyons in 2012. It has since been performed across the country and at the 2013 Edinburgh Fringe Festival.

Renee was awarded the "Accolade for Outstanding Performance" for this play and was nominated for the "Outstanding New Playwright of the Year" in the 2013 Chapman Tripp Theatre Awards.

Renee plays multiple characters in the play. A review of its Nelson production said: “She seamlessly transforms herself from one character to another.”

The focus of Nick: An Accidental Hero is Nick Chisolm, a young Dunedin sportsman who had a stroke while playing rugby. The stroke left him with a condition known as “locked in syndrome”. This meant that Nick was unable to move or communicate verbally.

Renee says Nick has fought hard to overcome his condition. He has regained some minor movement through gym sessions and regularly lifts heavy weights. He has also found love on the internet.

The play follows Nick’s journey, covering 15 years of his life. “I read the story on the internet and found it so inspiring,” says Renee. “Nick is such a great guy, who has triumphed over a massive challenge. Ultimately, the play is a positive one. It’s a celebration of the human spirit.”

Renee says the show’s positive message is why she is so excited about the chance to do a signed performance.

“It’s great to be able to make the show accessible to the Deaf community,” she says. “Nick’s is a really uplifting story that anyone who has had to face a challenge will be able to relate to”.

Renee says she would love to be able to continue the show’s accessibility journey and is looking at ways of making this happen.

“Nick: An Accidental Hero” is on at TSB Showplace at 6pm on Wednesday July 23 and runs for 60 minutes. Tickets are $15-$25. To book, call 0800 111 999 or go to www.ticketmaster.co.nz. To access the specially reserved seats in front of the interpreter use the password “SIGN” when booking tickets.