The women wrote songs about their upbringing. Songs of hope and love, loss and hardship. Songs that were "raw and true and real", says Maisey Rika, one of four musicians who taught songwriting to prisoners as part of a documentary series screening on Maori Television every Sunday night until 10 June.

Maisey Rika and Anika Moa worked with six women from Arohata Prison while Warren Maxwell and Ruia Aperahama worked with four men from Rimutaka Prison. They all taught the step-by-step music programme developed by Evan Rhys Davies – a pilot programme he had tutored at Spring Hill Corrections Facility in the Waikato.

Entitled Songs From The Inside, the series covers the ten-week period in which the four musicians taught songwriting. It culminates in the thirteenth episode with the songs the ten prisoners wrote, sang and recorded.

“The women were all talented and loved music but they had never been encouraged to use their talents,” Maisey says. “At first, they were totally out of their comfort zone. It took a lot of courage to share their inner soul, their wairua; to write about their experiences and then sing – all in front of the camera.” 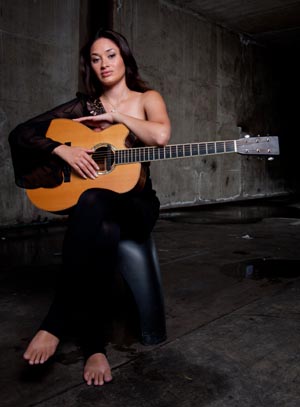 Initially, Maisey was also out of her comfort zone. “It was the first time I’d been inside a prison but when I heard about the project and its kaupapa – to mentor our girls in the power of music – I wanted to jump on board.”

Once the Department of Corrections gave the go-ahead for the project, the producers worked with the Department on matters of privacy, protocol and safety. All participating prisoners were minimum or medium security; none were sexual offenders or had committed crimes against people under the age of 18; and none received monetary payment.

All the prisoners participating in the course had to agree to be identified on camera – their songs and lives exposed to public scrutiny.

In Abi’s Song, she writes about “a demon in disguise … but a daddy in her eyes”. Nicole writes about mum “on the corner of the bed/Begging please stop hurting me/Babies don’t look here, turn away … ”

Over the four months of the classes, Maisey and Anika Moa gained the women’s trust and got to know them. “We were privileged to get close to them and found out they were just like you and me – except they made some wrong choices. They knew that it was their fault they were in prison and that they had hurt a lot of people.

“But they wanted to make changes and we were there to give them some tools to help them make that change, and to have something positive to reflect and act on when they’re released.”

Maisey says that eventually, the women will be released back into the community and they could be our neighbours. “Before that happens, I’d rather they were around something positive like music and the arts. What we gave them were tools in music, tools in writing, tools in therapy.”

Maisey believes the project will have a long-term impact on the women and says they gained confidence and a sense of achievement. They also learned a range of techniques in writing and singing, as well as communication skills.

"The small things we take for granted"

“We were there to teach the women but they taught us a thing or two,” Maisey says. “They taught me a huge appreciation for the small things we take for granted – like walking out the gates, going shopping and tucking your baby into bed every night.

“I now have a totally different perception about the women inside and I hope the television series will have an impact on the people who watch it. Hopefully, people will listen to them and get to know them a little over the series. They could be your sister, your cousin, your aunty. It could have been me but I made better choices.”