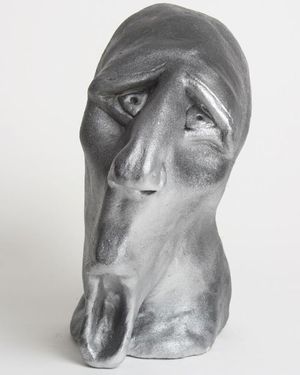 Quoted in an article By Charlie Cooper in London’s The Independent newspaper, Kate Rothwell was one of the participants at the 20th annual conference of the International Association for Forensic Psychotherapy, subtitled Murder in Mind. It was attended by psychiatrists from British hospitals, along with international experts and academics in the field of psychoanalysis.

Commenting on a Munch-esque self-portrait in clay, made during art therapy, Imke Wood of therapy charity Creative Expression, says: “Art therapy helps patients to be self-aware and understand themselves in a new light; recognising their negative and destructive behaviour but not being ruled by it. It is essential for rehabilitation.”

In the article, Charles Cooper writes: “At first glance, they could be A-level art exam entries or the outcome of an evening class. But the creative minds behind these works of art have a history of violence, even murder. The works are the fruit of pioneering art psychotherapy, which aims to understand and heal some of society's most dangerous minds.”

One painting is by a woman called Elizabeth (not her real name). After serving 24 years for murder, she began art therapy – developing a symbolic language in painting to work through her childhood traumas, depicting her abusive father as an ever-present leafless tree. She was later transferred to a low-security unit and is now considered safe to re-enter the community, says her therapist.