The governing kawa of the country's only Māori Focus Site at the Northland Region Corrections Facility in Kaikohe, as set by Ngati Rangi alongside the Department of Corrections, offers the best possible model to reduce re-offending among Māori. 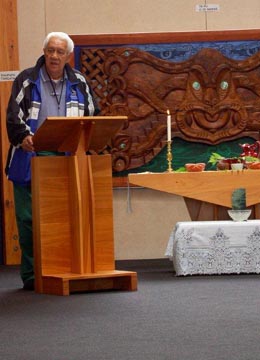 This is the thinking of Mark Lynds, Manager, Contracts and Services for the Department of Corrections’ newly formed Rehabilitation and Reintegration Services.

Mark says the cultural heart of the Māori Focus Site is the Pua Wānanga – a tikanga learning environment that calls for its Māori prisoner populations to be committed to their rehabilitative process.

The design of the Pua was established by Ngati Rangi, not only because NRCF is within its tribal rohe boundary but also because more than one thousand NgÄpuhi men are represented in the justice sector. NgÄpuhi has a vital interest in re-aligning their men with their core values, as part of their training to return to communities. 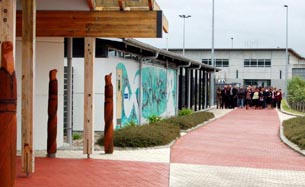 In January this year, the Pua Wānanga was rededicated when 38 large works – 22 whakairo carvings and an additional 20 tukutuku woven panels – were finally completed. These works took 18 months of work and 11,000 dedicated man hours to finish.

It was also an opportunity to reconsider the original design and purpose of the Pua Wānanga.

This would affirm that the tikanga of the Pua as set earlier by Ngati Rangi, along with their design for the works, would reconcile with the expected outcome of its prisoners – that they would need to be proactive in their desire to rehabilitate.

“The principles of tika and pono – of remaining true – are the hard requirements of following tikanga,” Mark says. “These tikanga are far more restrictive than anything else the Department could place on them. Things have to be done the right way from the get-go.”

Mark also says that the well-established kaupapa for the Māori Focus Site will attract the best people. “It will deliver on its outcomes because that is what it’s designed to do.”

So  why do  whakairo and tukutuku do more than adorn the walls in this place? 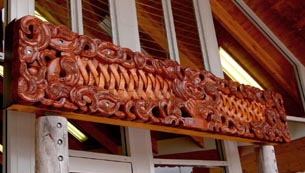 Staff at NRCF have long understood and worked with the arts as part of the rehabilitative process – whether they’re the traditional cultural practices of te ao MÄori, or the contemporary disciplines of visual or performing arts.

These artforms offer much – particularly when there is a continuum that allows a practice to be built. Skills and confidence are built, which transfers and strengthens both the ability and resolve of prisoners to stake a claim in a life away from crime.

Transferrable skills are particularly evident in whakairo, and the marae-based protocols and oratory of whaikorero, whakapapa, te reo Māori and tikanga.

Mark says he hasn’t come across many Māori who don’t have entrepreneurial skills, talent and “hard” artistic skills across performing arts, carving and oratory.

“I watch these men come alive within these things,” he says. “When we start helping them to realise their place within their whānau, hapu, iwi and in the land, they start coming alive and finding purpose.”

The carvings were produced on site in the carving programme. Most of the works were completed by four senior carvers but up to 12 people worked at on them at various stages. The panels are of norfolk pine (of the kauri genus) and totara, sourced locally.