Circa Theatre is reaching a new audience with its first audio-described performance of Roger Hall's hit comedy Four Flat Whites in Italy on 5 October, “ a performance that's been welcomed by blind and vision impaired people. 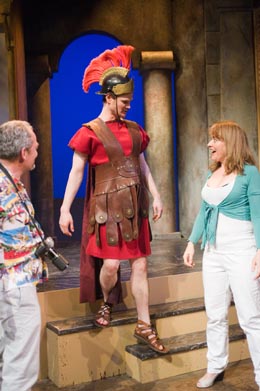 Ann Bain, branch chair of the Association of Blind Citizens of New Zealand, says she is delighted to have another opportunity to attend a live theatre performance, after experiencing Toi Whakaari’s audio-described performance of The Pohutukawa Tree last year.

“As a blind person, I can hear the dialogue but there are a lot of things I miss out on – things like the stage set, the movements and gestures of the actors, the costumes and the lighting effects,” she says.

Ray Henwood, Circa Council Co-ordinator, says that making the theatre’s productions accessible to a wider audience is a priority.

“We are very excited to be presenting our first-ever audio-described performance,” he says. “Roger Hall is one of New Zealand’s favourite playwrights and Four Flat Whites in Italy has been incredibly popular with audiences all around the country.

“We hope this performance will be the first in an ongoing programme of audio-described performances at Circa.”

This audio-described performance is open to the general public. One hundred headsets will be available to blind and vision impaired patrons, and Ray says the audio description will not have any impact on the rest of the audience. 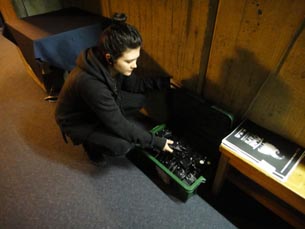 Audio description is a commentary for blind and vision-impaired patrons about what is happening on stage in between the dialogue. An audio describer talks into an AM microphone and transmitter to provide the commentary. This is transmitted to AM wireless receivers and headsets worn by the audience members.

Sarah Adams, one of the few audio describers in the country, is organising the audio description for Circa Theatre. A Toi Whakaari graduate, Sarah was responsible for last year’s successful audio-described performance of The Pohutukawa Tree at Toi Whakaari.

“The Pohutukawa Tree was performed to a full house of 80 blind or vision impaired patrons and their response was overwhelming,” Sarah says. “It’s fantastic to be able to provide another chance for vision impaired people to enjoy the full experience of live theatre.”

Arts For All Wellington Network

Circa Theatre is a member of the Arts For All Wellington Network, set up in 2010 by Arts Access Aotearoa in partnership with Wellington City Council. This network, made up of representatives from the disability sector, arts organisations and venues, meets throughout the year to gain insights, seek advice, and share information and resources.

“We’re absolutely delighted that Circa is taking this step in opening its doors to a blind and vision impaired audience,” Richard Benge, Executive Director, Arts Access Aotearoa, says. “We look forward to working with them on this and other initiatives that enhance access to live theatre for disabled and Deaf audiences.”

Circa Theatre’s audio-described performance of Roger Hall’s Four Flat Whites in Italy starts at 2pm on Wednesday 5 October. A touch tour of the set starts at 1.15pm.