Worth AUS$50,000, the Ros Bower Award honours an artist or arts worker with a proven record of high achievement in the field of community arts and cultural development. 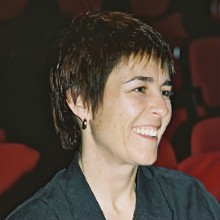 Kharen has been creating theatre with women prisoners for nearly two decades and says: “It’s just like working anywhere else except that these people are in extreme circumstances.”

She first became involved with Somebody’s Daughter as a student. The one thing she recalls when she first worked with the prisoners was that “you were working with the truth a lot”.
“Because so much else was taken away from people, everything else was stripped away. I think that the rawness and level of truth was the most humbling thing because that’s what people have, and I guess for me it was more what they would think of me rather than what I would think of them.”

Kharen is a director, writer and performer. Deputy Chair of the Australia Council’ s Community Partnerships Committee, Jeremy Smith, says that Kharen’s work has pushed artistic boundaries and transformed the lives of many who have been a part of it.
“Her ability to connect with people, to understand their background and encourage them to tell their story is nothing short of remarkable,” he says.

Kharen says that being able to engage creatively doesn’t just benefit the prisoners who act in the productions. The works also attract a new set of people who may never have attended the theatre, or thought that the performing arts was something that could meaningfully impact their lives.

“People who never go to a theatre, who never set foot in a theatre … They come because they know somebody there ... This is such a foreign world to them. They are the people that we’re also accessing, those who feel that a theatre or that sort of environment is out of reach for them,” she says.

Along with her work in correctional facilities, Harper has also worked with the Highwater Theatre programme, where she works with young people who have been physically or emotionally damaged and are unable to attend school.