Because I have seen proof, I have no doubt that art making and creative expression can change the life of prisoners who have access to art materials, classes, tutors, instruments and studio space. We are fortunate the Department of Corrections in New Zealand also understands this. 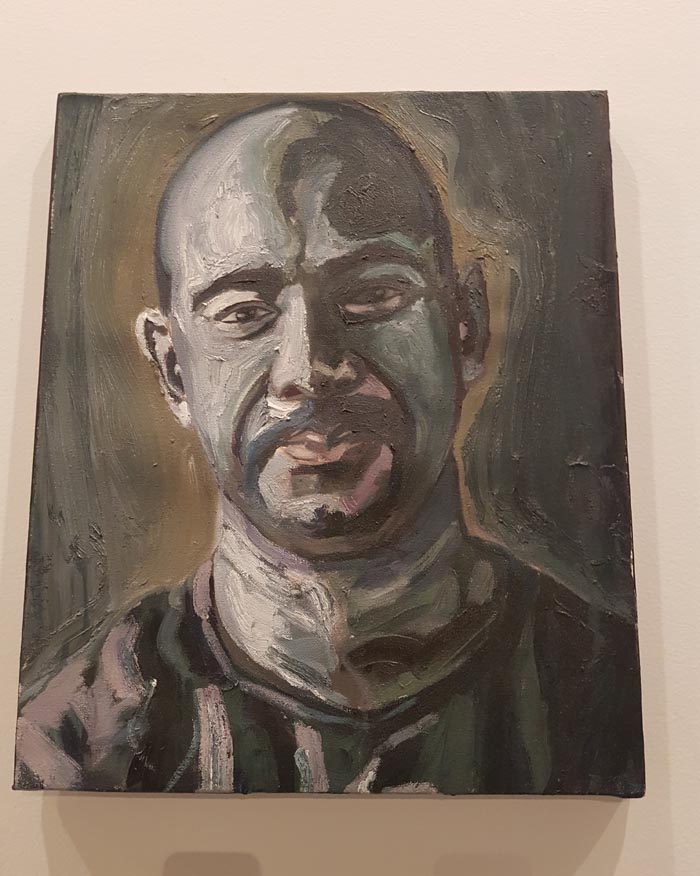 The most powerful and moving testament to a life transformed has been provided by artist Myuran Sukumaran. His first major exhibition, Another Day in Paradise, drew visitors to the Campbelltown Arts Centre for an unforgettable exhibition co-presented with the Sydney Arts Festival until it closed on 26 March 2017.

Myuran was incarcerated in Kerebokan Prison Denpasar on Bali for more than ten years. After his trial and facing the death penalty as one of the Bali Nine, he became a visual artist. Developing his practice, he tutored fellow prisoners also drawn to art making. He attracted artists and tutors from Bali and overseas, and his transformation inspired everyone. The art flourished. Myuran changed.

This was not enough for the Indonesian authorities and even against repeated calls for clemency from the Australian Government and worldwide advocates, Myuran  was executed along with Andrew Chan and six other death-row prisoners on Nusa Kambangan Island in 2015.

Fortunately, his relatives and friends managed to collect and save his artworks. These form the body of work in Another Day in Paradise. In this powerful exhibition, visitors learn about the man, his critical situation and the many characters (such as politicians) impacted by his sentence. He was a prolific portrait painter of others and of himself. 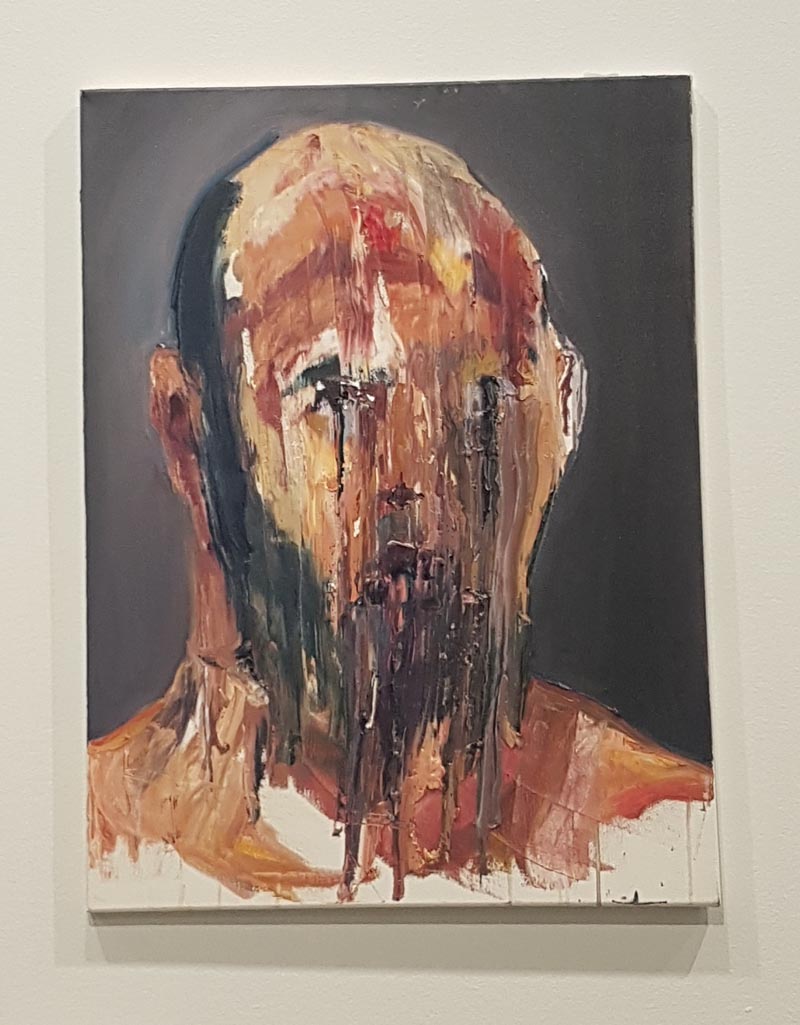 There is an entire wall in the exhibition dedicated to self-portraits completed in the 72-hour sleepless vigil before his execution. Horrible and humbling to see. Each painting takes the viewer more deeply into the mind of this incarcerated man, reaching out for the world in his search for redemption and freedom.

The exhibition juxtaposes Myuran’s works with six commissioned works by contemporary Australian artists, responding to the death penalty and the loss of Myuran to the world.

I feel very deeply about Myuran Sukumaran and the waste of his life, his potential and his talent. Even though he was rehabilitated from his criminal past to become a man of potential, he was denied the opportunity to live. Had he lived, I am sure he would have spent the rest of his life as an artist demonstrating the power and purpose of rehabilitation through the arts.

I am greatly indebted to have experienced the exhibition, curated by his friend and mentor Australian artist Ben Quilty and Cambellown Arts Centre Director Michael Dagostino. Through this I’ve been able to find a more rounded story: Myuran’s family, volunteer tutors, and supporters and advocates of The Benga – the art projects section of Kerebokan Prison that Myuran established as an art and creativity hub. It still exists. Prisoners whom Myuran taught still paint there. It receives no official funding, relying on the good will of local tutors and donors. It deserves support.

I have heard that Another Day in Paradise may travel. I hope it does. Myuran’s story and the artworks that took him from crime to redemption deserve to be seen and learned from indefinitely.

"Proving that people can change"

In the curatorial statement from the visitors guide to Another Day in Paradise, it says:

“For Myuran, painting was a means of communicating with the world and a redemptive practice. He produced work prolifically under unimaginable and extraordinary circumstances, leaving an artistic legacy that speaks to the power of art to heal, and proving that people can change.” 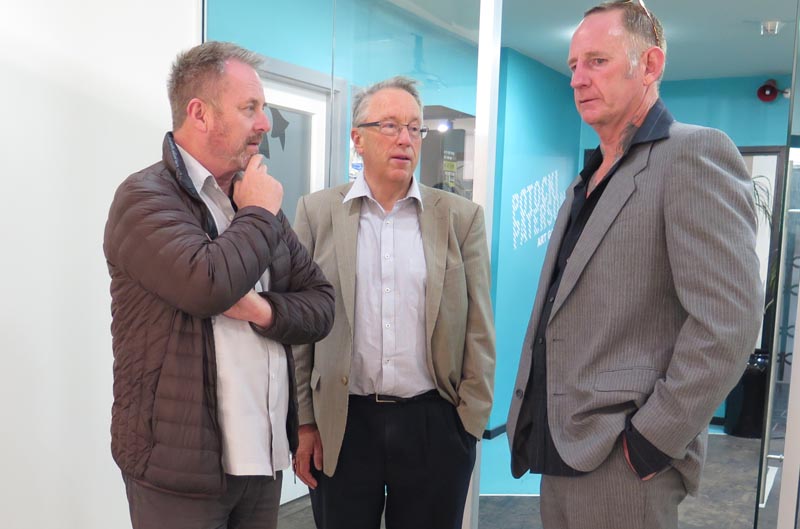 On this side of the Tasman another story of rehabilitation through visual art is fast emerging. The talent and determination of Simon Kerr is attracting wide attention across the art scene. Simon took the opportunity offered through art to allow his talent to flourish and to open the door to a new self-identity and positive change.

Released from prison in late 2015, Simon is pursuing his pathway as a contemporary visual artist. His artistic talent was recognised when he was in Northland Region Corrections Facility and he was given the opportunity to develop this talent through the prison’s arts programme.

Simon Kerr’s work featured for the first time in the capital at the Potoki Paterson Art Gallery. Media interest has been high and the exhibition attracted large visitor numbers. 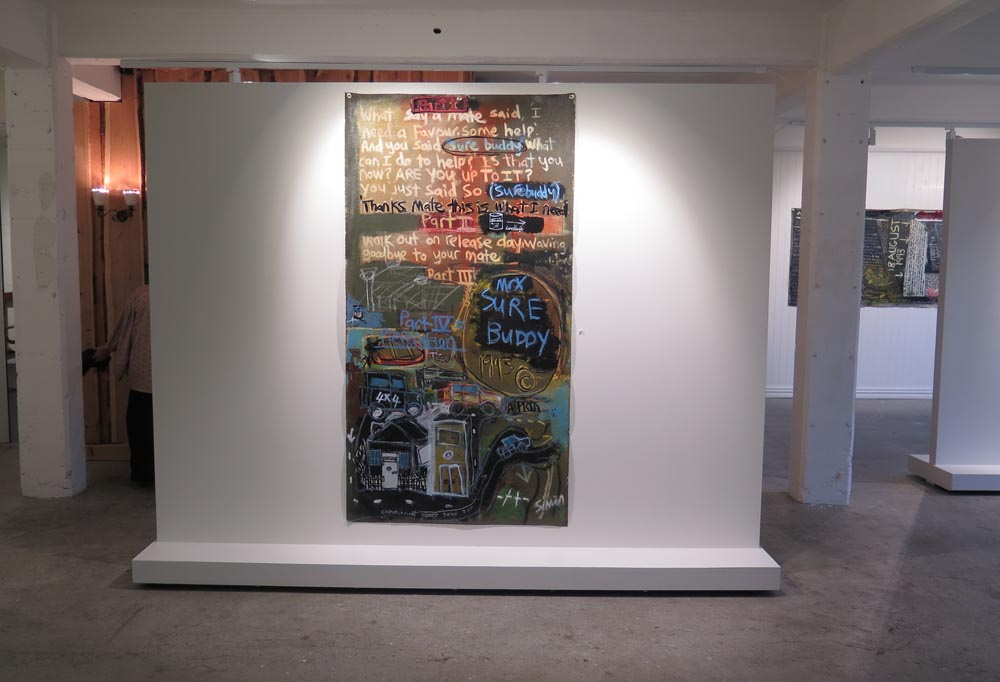 Naturally enough, gallery visitors were drawn to Simon’s criminal ”back story” and its own movie-like narrative. What is important is when his life takes the transformative path through art and turns to the positive.

Simon’s works are paintings but he told me that he sees himself as “more of a narrator”.

This was his sixth solo show. Each exhibition seems to be a process in remembering, releasing aspects of his past and “letting it go” on canvas.

Simon Kerr’s life is now on a creative pathway, in part because he had access to art materials, the encouragement of trained art tutors and the space to paint. He’s a contemporary artist. Everyone benefits.

+ Text Size -
Do NOT follow this link or you will be banned from the site! Original generation time 2.0829 seconds. Cache Loaded in: 0.0493 seconds.