The harmonies of prisoner voices, accompanied by taonga puoro (traditional Māori musical instruments) at Te Ao Marama, the Māori Focus Unit at Waikeria Prison, are one of a number of tools offered to support the rehabilitation of prisoners.

Errol Baker, the Residential Manager at Waikeria Prison near Te Awamutu, is innovative in his approach to the rehabilitation and reintegration process of prisoners in the cluster of units he manages there.

The influences of his family’s choir, along with the three-times-a-week practice routine while he was growing up, have instilled an appreciation for the discipline and motivating power of music.

“Singing alongside one another is a leveller,” Errol says. “I say to gang members that it’s is a good place to be if you want to do well.  But if you want to be part of it, you have to co-operate. It doesn’t just happen.” 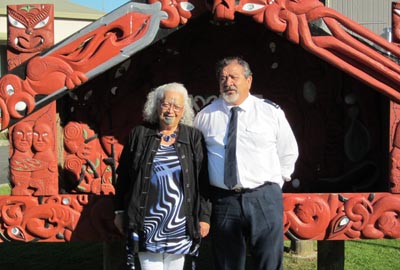 His love of music combines with what he refers to as the “remarkable knowledge and skill” of Hinewirangi Morgan, taonga puoro exponent, musician, poet and activist.

Hinewirangi has worked with prisoners in Waikeria Prison for about 24 years. In her taonga puoro classes, which run for 20 weeks, she combines making and playing traditional instruments with waiata and haka, and showcases the work through live performance.

Community networks, including the local council, service organisations, schools and music groups, attend these events. In November 2011, Waikeria Prison celebrated its centenary. A group of up to 60 men performed to 200 guests within the prison complex.

Errol is often surprised to find that Māori men can be quite reserved. “It’s powerful for them to stand on a stage and perform. It’s definitely an ‘I can do this’ moment,” he says.

Ongoing music initiatives include a guitar and ukulele programme, delivered to ten or twelve men at a time. Some have never played an instrument before.  Now in its third year, the group is capable of presenting a monthly concert.

A recording facility, made available through Hinewirangi’s networks, means that new music in both the taonga puoro and Māori therapeutic programmes can be recorded to CD.