Two carvings and a painting, commissioned by the North Shore Hospice, were handed over in a ceremony at Auckland Prison's west chapel last month. They will be installed and unveiled in a public ceremony at the hospice in October.

The carvings and painting were produced by a well-established carving group at Auckland Prison. Tina Parata, Kaiawhina at the North Shore Hospice, says the work includes a pou (carved pole), a pare (lintel) and a painting.

Twenty members of the community attended the handover, including kaumatua from Ngati Whatua and master monolith carver Kerry Strongman, who donated the rakau (wood) for the project. 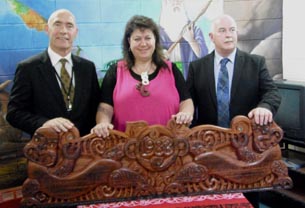 Mark Lynds, Manager, Contracts and Services, Department of Corrections, says guests at the handover to the hospice were stunned by the craftsmanship and humbled by the Mihi Whakatau ceremony that accompanied the handover.

Mark and Terry Buffery, Acting Regional Manager Northern Prison Services, both spoke of the importance of breaking down the barriers between prisons and the community through projects such as this.

For Tina, the project is a win-win situation for everyone: the hospice, the Department of Corrections, the local community, the prisoners and their  families.

“The hospice benefits from receiving these taonga, which will help make the hospice a more acceptable place for Māori to enter,” she says. “Corrections benefits because the men are enabled to believe in themselves and their potential, and are less likely to re-offend. And the community and family benefit from having people who are positive, upstanding and contributing when they re-enter the community.”

The pou will be installed in the garden in front of the hospice; the pare will be placed over the entranceway; and the painting will hang inside in the reception area.

“It’s hard to put into words how incredible these artworks are and how much help they will be to me and to Māori coming into the hospice,” Tina says. “The hospice is a European concept and traditionally, it’s not a place that Māori would consider going to. These works will be welcoming to Māori coming through the front doors – whether they are visitors, patients or staff.

“I’m the Kaiawhina at the hospice, supporting M?ori patients and their families, and sometimes I’ve felt quite lonely because mine is the only M?ori-specific role. The carvings will support me as I come and go. But more importantly, they will support all people, including Māori, coming to the hospice.”

Tina was one of the hospice community members who met with Mark Lynds and the prisoners to talk about the hospice and the commissioned project. The prisoners then developed a brief about what they would like to do. Tina says that when the hospice’s Māori Advisory Group (including Ngati Whatua Kaumatua) saw the brief, they loved it and adopted it immediately.

Tina praises the work of Mark Lynds and what he has achieved. “Without Mark, this project wouldn’t be happening. I can see the men’s growth and the mutual respect between them and Mark.”