US prison arts founder named Greatest Person of the Day

Katherine Vockins, founder and director of New York-based Rehabilitation Through the Arts (RTA), was earlier this month named Greatest Person of the Day by America's influential Huffington Post blog. 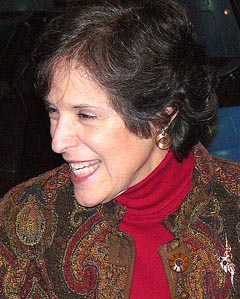 The honour is bestowed on “an exceptional individual who is confronting the country’s economic and political crises with creativity, generosity and passion”.

Asked to describe the philosophy behind RTA, Katherine said more than 95 per cent of prisoners in the United States are released at some point, and “releasing prisoners who are not educated, not employable and vengeful is just asking for trouble.”

RTA works on transforming poor communication skills, a rigid belief system and a lack of self-control and discipline, using creative arts as an inclusive tool to engage prisoners across cultural, age and language barriers.

RTA operates in five New York State prisons, providing a range of programmes from theatre and dance to creative writing and visual art. This month the group presented The Inside Story, a unique theatrical event with a cast including formerly incarcerated men and women who participated in creative arts programmes while in prison. They were joined by Broadway actors who performed readings, scenes, monologues and dance depicting life behind bars.

The Commissioner of the New York State Department of Correctional Services was honoured before the performance for his “enlightened support of the arts in prison”.

'In touch with their own humanity'

Katherine said that at a recent ‘homecoming’ gathering of former prisoners, volunteers and families, “so many of the prisoners credited our work with helping them to be in touch with their own humanity, reconnect with their families and become better human beings inside and outside prison”.

Research by New York prison authorities and the City University of New York found rates and severity of infractions within prison were significantly improved among RTA participants, compared to a control group. The RTA participants had better social and coping skills, which improved with increased time in the programme.

The national recidivism rate in the United States is 67 per cent in the first three years. Of approximately 25 RTA participants released from various prisons over the last decade, only two went back.

In a programme RTA is developing with the City University of New York, prisoners will earn college credits and a certificate in community outreach facilitation, so when they are released they can work in social service agencies. The proposal is being reviewed by university committees, and Katherine hopes classes will start next year.

Another RTA initiative is the creation of a series of peer training videos for use in prisons.

A video about the role prison tattoos play in hepatitis C has already been produced, and there are plans for an adaptation of a prisoner-written play about the difficulty of dealing with families from the inside.

Katherine says the RTA programme “is not about making artists or even making great art – it’s about learning to work together, listen to each other, settle arguments without violence, build community and learn that each person shares responsibility for the successes of the group”.

One inmate summed up the benefits of the RTA programmes in this way: “Art allows you to think differently so you behave differently, so that you can get different results. To me, that’s the definition of rehabilitation.”

+ Text Size -
Do NOT follow this link or you will be banned from the site! Original generation time 2.9196 seconds.