"International research shows that the arts in their many forms can be a powerful rehabilitation tool for prisoners," says Mark Lynds, Programmes Manager at Auckland Prison and Northern Region Corrections Facility, and recipient of the Big â€˜A' Prison Arts Leadership Award 2009.

“Art creates the opportunity for self-expression, self-belief and mana enhancement. There are also opportunities for some of the really talented artists inside to build  knowledge, gain qualifications and create a viable vocational option for themselves.”

Mark has been working in prisons in New Zealand for 19 years and has constantly promoted the arts as a vehicle for rehabilitation and a vocational option. 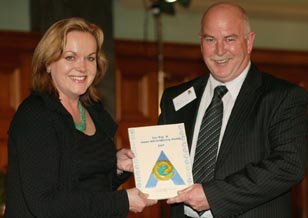 The judges described Mark as “a motivator, taking a project from the beginning and seeing it through to the end. He plans, works strategically and knows how to get what he wants for his projects. He’s a mover and shaker, showing outstanding leadership qualities in his work with prison arts.” 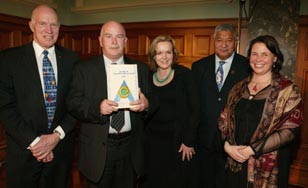 Mark Lynds takes a holistic approach to working with prisoners and believes that firstly, you need to find the key to unlocking the potential for good. For him, art and cultural knowledge is one of the most important keys to restoring mana and a sense of self-worth.

Thanks to Mark’s leadership skills, prisoners’ work is displayed inside and outside of prisons. He has raised money for charity through the sale of prison art, thereby encouraging prisoners to give something back to society.

Over the years, he has worked closely with art tutors and helped them promote art as a positive influence for change. He provided the impetus for several major projects, including the A+ Starship Hospital art project in 2004/2005. This culminated in the gifting of more than 30 artworks to the hospital.

Mark is a PÄkehÄ of Irish descent but grew up in Te Kuiti surrounded by taha MÄori. His wife is of NgÄ Puhi descent and they have three children. Since moving from Auckland to Kaikohe and  NRCF, he has breathed new life into its carving school and tikanga philosophy, with mentors/peer tutors teaching other prisoners traditional performing arts and whakairo. Several major works now adorn the public areas of the site.

These mentors are now working towards their Adult Teaching Certificates (Level 4). Two recently released mentors have taken up work with community groups while another who worked on the A+ Starship Hospital project from start to completion is now back in side – not as a prisoner but as a tutor in Tikanga MÄori.

In 2007 and again in 2009, Mark organised an open day at NCRF, displaying the programmes, arts and culture to members of the local hapu, iwi and community. The open day in 2009 included an exhibition of artworks by staff and prisoners.
The carving school at Auckland Prison has also produced major works under Mark’s supervision. It has gifted a waharoa (carved entrance) to a local school and is involved in several other community projects.