Musician and school teacher Evan Rhys Davies was intrigued, intimidated and filled with anticipation when he was invited to develop and teach a pilot creative writing and songwriting course to prisoners in Spring Hill Corrections Facility. 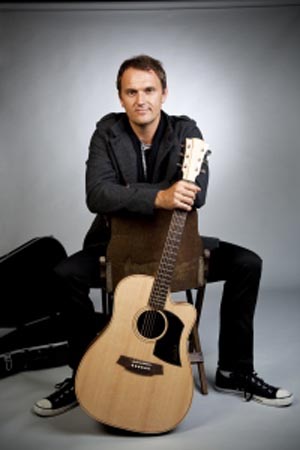 That was back in 2009 and he had never taught in a prison before. Nor had he heard of anyone teaching songwriting to prisoners. Once a week for two hours, he would teach a creative writing class of 20 men, followed by a song writing class of eight men.

“I began to see and hear all of this talent and once I heard the songs they had written, I decided they deserved to be recorded,” he says.

The result was a CD called If These Walls Could Speak: Live recordings from Spring Hill Prison.

The novelty factor appealed to the men because it was different to the other courses available to them. But it came with its own challenges. Evan had to keep the creative writing tools and song structure flexible, catering to the various skill and literacy levels.

“Some of these guys have difficulty with literacy or don’t play an instrument, so you can’t just deliver a rigid and theoretical course,” Evan says. “I had to feel my way through, keep things fluid and be ready to adapt in order to engage with the men. That way, skills could be developed at a pace that everyone was comfortable with, allowing them to find their voice in their own time and way.”

It soon became clear to Evan that music and art had the potential to transcend the walls of the prison and open up the prisoners, enabling them to express themselves more freely and explore their natural gifts.

“The men have a lot of defence mechanisms and barriers they put up to protect themselves. One of the guys didn’t speak for the first seven weeks. Then one day, he pipes up offering to play a song. Suddenly, this amazing, soulful voice comes out of the guy. It was surreal.”

Evan’s experience subsequently inspired the critically acclaimed documentary series Songs From The Inside, which featured on Maori Television earlier this year. A consultant to the series, he says the positive impact on the prisoners at Arohata and Rimutaka Prisons was similar to what had happened at Spring Hill Corrections Facility.

“One of my students, Gaz (not his real name), believed that outside of having his children, the process had been the greatest experience of his life. It’s one thing for them to learn a trade or how to handle their bank accounts as part of their rehabilitation but that doesn’t teach them how to deal with their emotions.”

You don’t have to know as many chords as musician Warren Maxwell to write and play a song, Evan says. But what you are forced to do through the process is look inside yourself and face your inner demons.

Through their songs, they are able to share emotions they wouldn’t necessarily share if they hadn’t been accompanied by a melody.

Making peace with themselves

“What’s great about writing a tune is that it is able to be kept alive in a cell,” Evan says. “And it’s a way for the men and women to make peace with themselves in a dark place. Even if no one can hear them.”

However, he adds, there’s also a lot of value for the prisoners when their songs are heard by someone they respect.

“Some of the students don’t have much else to hold on to. But guys like Gaz can now play the guitar and express this well of emotions, dreams and let-downs. He was able to realise his life wasn't so dark and it supplied him with a lifeline of hope.”

Evan is keen to continue his work teaching songwriting in prisons and hopes there will be further opportunities to use the music course he developed and refined, based on his practical experience.

“The course could be taught to other tutors and facilitated nationally but run locally,” he says.