20 October 2011
A recent Pacific Island graduation and open day demonstrated yet again the deepening response from the Pacific community to provide support for prisoners and their return to the community on release. 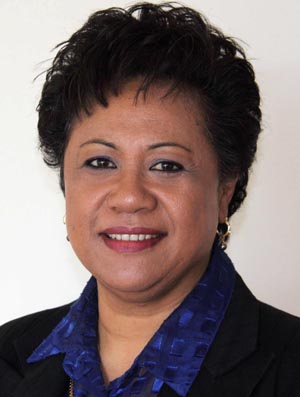 Ties of family and community

However, it’s the ties of family, of community and the wider Pacific networks that demonstrate what can be achieved when prisoners are supported to live back in the community on release.

“This is when you see the genuine support from the families of the Pacific community,” Asenati says. “They don’t just come on their own.  They bring others; they unite their support for the men in prison. A lot of the children of prisoners are part MÄori, Scots, Cook Islands.  And we have been very mindful of that.” 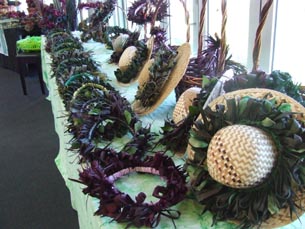 Asenati describes Mary as the “cornerstone of art making” at both the Pacific Focus Unit at Spring Hill and Auckland Region Women’s Corrections Facility at Wiri.

Mary is the inspiration behind the unique, man-sized bouquets, woven from palm leaves and laufala (flax), and the traditional screen printing and dying processes. Asenati says she also works alongside community groups that support the Polynesian Art Creation programme initiatives.

One of these groups is the Mamas and Papas from the Auckland Council’s Pacific Art Centre. Asenati says they are respected Pacific Island elders who are not related or necessarily known to the men but who engage with prisoners in a way that few others are able to. 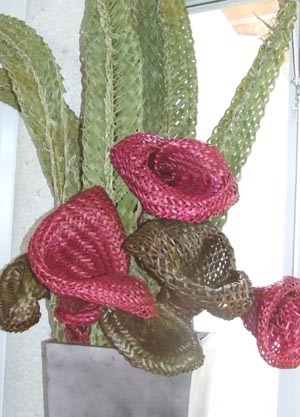 Their innate ease and patience help the men rebuild their trust. “One of the fascinating elements of this group is the role of older women. The Mamas give an instruction, and the men recognise it and simply don’t argue,” Asenati says.

“They expect to receive instruction from these elders who are often also admired leaders within the community. Mutual trust and respect is implicit in such a relationship.”

Another group providing support for the programme initiatives, and for Mary Ama in her role as Fautua Pasefika, is the Pacific Mothers from Waitakere, Tiana Epati and Mata Tupae.

“The art-making environment is a very suitable place for Pacific Island people to come into and work alongside prisoners,” Asenati says. “In the course of being together and talking, men are able to see the issues of being in prison in a new light. It helps them to see their situation differently.”