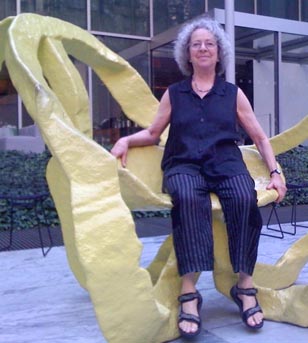 “Having been immersed in art all my life – as a student, a painter, a teacher, a patron and friend of painters – I am convinced that art making is a natural human impulse and everybody has the potential. But often, internal and external events block the access.”

Phyllis has been involved with prison art in America for more than a quarter of a century.

“I loved teaching, eventually more than painting, but the right setting eluded me until 1983, when I applied for a job teaching art to prisoners. It was unknown territory to me, and very intriguing.”

She was hired to hold classes at Oklahoma state penitentiaries – from  minimum security to death row – and soon became hooked.

“The first day my new students brought amazing pictures and objects they had already made without benefit of art class or real supplies. I saw immediately that it would be ridiculous to proceed with the idea that I was the artist and the inmates were not.

“They were unskilled and spontaneous, in touch with a very deep source. It became my priority to keep it that way.”

After 27 years Phyllis is still teaching art in men’s and women’s prisons. She says the programmes are surviving and thriving thanks to generous non-profit assistance and the far-sighted support from the institutions.

She tries not to get in the way of an inmate’s natural expression, or to impose her own concepts or techniques.

“So many of the prisoners are overtaken with creative force as soon as they get their hands on the materials, and all I have to do is get out of their way. With others, I have found ways to help them free themselves from their ideas.”

She said it is illuminating and exciting to see the prisoners “discover something very positive, and mysterious, coming from inside themselves. The art is often miraculously fresh, and despite the context, there is a lot of joy.”

In her book, Cellblock Visions – Prison Art in America Phyllis explains how art emerges in the most restrictive of environments and what gives inmate art its distinctive character.