A large, unfinished quilt has been completed after several years and installed as a wall hanging at Auckland Region Women's Corrections Facility in Manukau.

This is due to the efforts of the Auckland Quiltmakers, the volunteer Stitch Group and a group of women prisoners. The volunteer stitch experts have been delivering the stitch programme to Auckland Region Women’s Corrections Facility for five years. 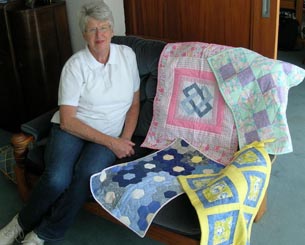 Justine has been part of this highly organised volunteer group since its inception in August 2006. She says the “Dresden Plate” quilt, started in 2007 and completed in 2009, was the work of approximately 25 women prisoners.

The quilt, donated to the Department of Corrections by the Stitch Group, has been installed in the foyer of the facility. It is a testament to the women’s “skill, patience, and willingness to learn and see a project completed”, Justine says. 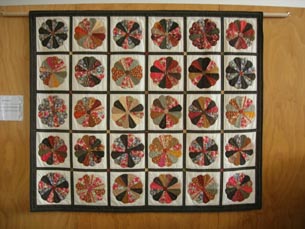 The quilt comprises 30 individual circular flower forms, each made up of petal or leaf-shaped pieces and set in squares, which are called blocks.

“Each of the blocks was made by hand, and then the women positioned the finished pieces before stitching them together. A huge quilting frame was brought into the prison to stitch the backing, the batting and the top layer together.”

So who are these women who give up their Friday mornings and Saturday afternoons, week after week, so that others can benefit from the stitching experience?

“We are women of like mind, semi-retired, in our late fifties and onwards, who have the time to be doing this work,” Justine says. “I was involved in the quilting business for many years and this is a way for me to pass on my skills to women who have never had the opportunity to learn them.

“The other day I was thrilled when I heard one of the women saying, ‘I can now go home and teach my daughter how to quilt’.”

Each year, approximately 50 women attend the stitch group programme. A maximum of 12 prisoners are able to take part in the classes. Some women start by learning to thread a needle. They all learn to stitch by hand and make smallish bags that carry their work to and from class. 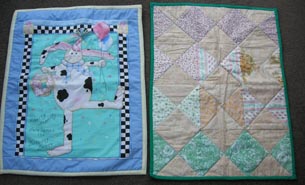 They graduate to cushions, small wall hangings for their rooms, and then to the bigger projects of making quilts for neo-natal babies at Middlemore Hospital.

The basis of these quilts is “orphan blocks” – incomplete quilted pieces that are donated by quilters across New Zealand.  This is made possible through the networks of New Zealand Quilter, a national quilting magazine produced in Wellington. The prisoners then work on the surrounding pieces to set sizes.

Justine says visiting the prison and working with the women is very satisfying.

“One of the most important aspects of the work is that it provides an opportunity to create. It develops skills and creative relationships with each another. We encourage the women to be confident in choosing their colours.

“This is a very happy group. We hear the women say, ‘I wish we could do this every day’.  They develop friends among themselves, and build their own sense of community.

“With the Saturday self-care group, babies and dogs come into the classes, and there’s a wonderful ease and companionship.

“We’re not officers; we’re someone different for them.”