26 April 2017
Simon Kerr’s latest solo exhibition, On the Way to the Opera with the Drug Lord and Mr. X, explores the 1993 escape of convicted murderer Michael Bullock and the late drug trafficker Brian Curtis from a maximum security prison by an unknown person – Mr X. 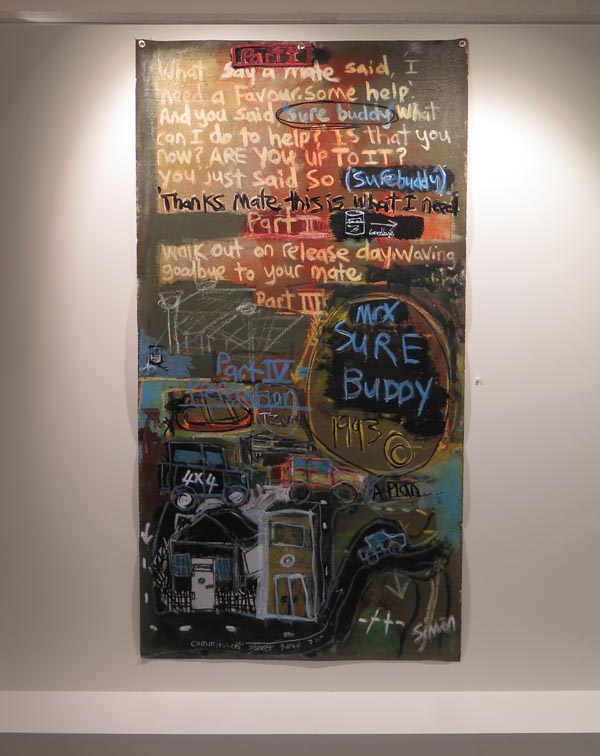 This escape is interpreted through the fragmented scrawls of text and earnest, primitive drawings found across all of Kerr’s featured paintings.

The entire show is framed around the phrase “Sure buddy” and the meaning behind it. This term is graffitied across many of the ten works and symbolises both the folly and moral dilemma of offering help to a “mate” even if that means potentially compromising your own ethical code. It is in the painting Part I where the phrase “Sure buddy” is most prominent.

Kerr’s painting technique is highly gestural and immediate. It seems as though he has created a style based not on imitation but on a guideline of instinctive application and direct vision. At first glance, many of the images can be difficult to decipher. But if you read them more as comic strips or illustrated narratives rather than as paintings, the series becomes easier to understand.

Each painting or panel acts as its own self-contained story. When viewed alongside other paintings, which reveal a different part of the escape, they then act as a sequence of events – a progressive story. 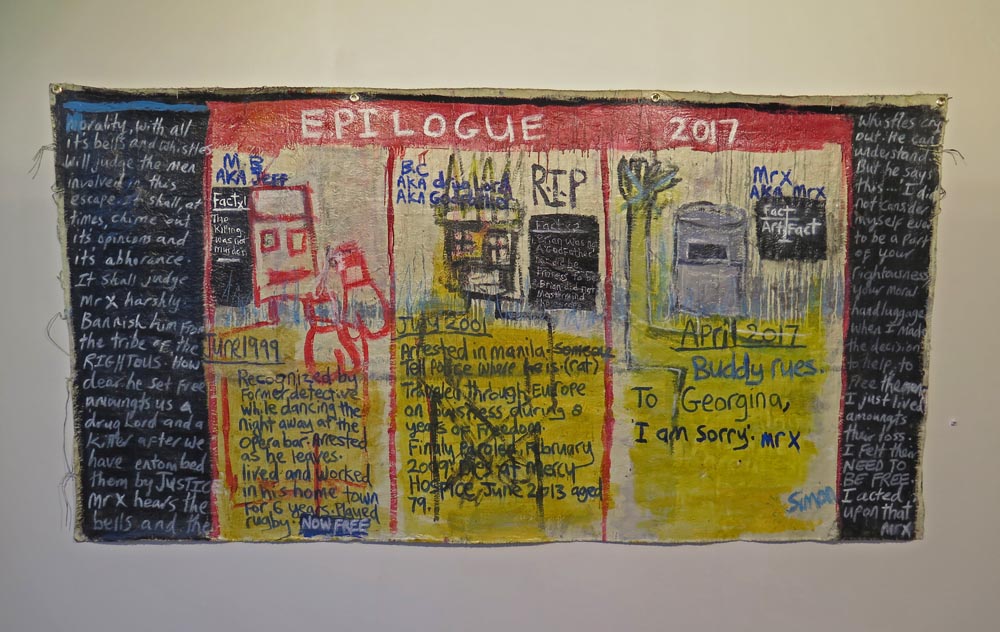 Epilogue 2017 is arguably the apex piece in the entire show. Questions asking what happened to the prisoners after the escape and the reasons behind Mr X’s actions are addressed within this image.

The composition is divided into three vertical columns: one for each escapee. You could almost mistake them as cartoonish headstones with inscriptions. In the bottom right corner of Mr X’s column is a dated apology addressed to Georgina, wife of the late Brian Curtis. It states simply:

This apology is a highly sobering motif. Its visual simplicity and lack of bombast makes this specific part of the work all the more piercing. Moreover, it both reads and looks like the last entry of a diary page, acting as a poignant reminder of the tremendous impact on all people involved with unresolved cases.

Above this text floats a Ned Kelly-like helmet, alluding to Mr X’s criminal past and to the shared folklore-like qualities between the infamous Australian bushranger and this entire case. On the far left and right of the painting are more handwritten lines of dialogue that reveal Mr X’s inner anguish over his actions.

Clearly, helping break out two convicted criminals from prison comes at a price. So the exhibition works on two levels. Firstly, as a stark reminder of the dangers involved in offering misguided help for nefarious purposes. But also as a symbol of how people can change for the better and rid themselves of the labels from which they have grown accustomed to.

On the Way to the Opera with the Drug Lord and Mr. X is Simon Kerr’s sixth solo exhibition. It ran at Potocki Paterson Art Gallery in Wellington from 7 to 21 April.