The benefits of networking

Partnerships between arts organisations working with the Deaf and Maori communities and theatres collaborating to solve technical issues over hearing loops are among the many positive outcomes of an ongoing consultation process following the release of Arts for All: opening doors to disabled people. 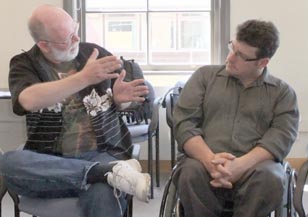 The practical guide on the arts and disability, published by Creative New Zealand in partnership with Arts Access Aotearoa, was launched in December last year.

Regional workshops have since been held in Auckland, Wellington, Christchurch and Dunedin, and last week groups of representatives from arts organisations in Wellington met for a series of follow-up cluster group sessions. Similar cluster meetings are being planned for other regions next year.

Working together to find solutions

“For example Circa and Downstage Theatres have hearing loops – which is fantastic – but both have been having technical problems with them. Now that they both know that, they can work together to find solutions.”

Odd Socks Productions, which creates performance and training opportunities for Deaf and hearing arts practitioners, was represented at several of the cluster meetings.  The group is keen to engage with mainstream arts organisations in Wellington to have more signed performances at a reasonable cost.

Emma said a high percentage of children in the Deaf community are MÄori, so Taki Rua Productions is looking at partnering with Odd Socks to develop programmes, and one of the MÄori theatre company’s staff is planning to learn sign language.

The executive director of the New Zealand International Festival of the Arts, Sue Paterson, has a partnership with a vision-impaired person to work towards making sure the festival’s programme information is accessible.

The Wellington meetings are being used to pilot the cluster group concept. Arts Access Aotearoa will be keeping in touch with the people involved in the Wellington groups to follow their stories, and profile and record the progress they make on accessibility at events over the next few months, before taking the concept to other regions.

Preliminary discussions have already been held with community development, arts and culture executives at the new Auckland Council.

Emma has been impressed with the response – and enthusiasm – from art organisations wanting to be more inclusive as they look to build their audiences.
“The cluster sessions in Wellington were only last week, and already many of the organisations have come back to me seeking advice on policies such as ticketing and other aspects of accessibility.

“We want to move things forward in a supportive environment, and we want to do it together.”