The written word at Arohata Prison

The walls of the small library are lined with books. It's an oasis in a desert, say the women taking part in the weekly creative writing class and book group at Arohata Prison in Tawa, Wellington.

Once a week, prisoners from the low-security wings can attend the creative writing course run by writer and volunteer Maggie Rainey-Smith. Some return in the afternoon for the reading group. All of the women are keen to contribute to the discussions, share their writing or read aloud.

The women – today there are six at each session – seem hungry to read and write and discuss. They say they read a lot, many of them getting through four or five books a week. 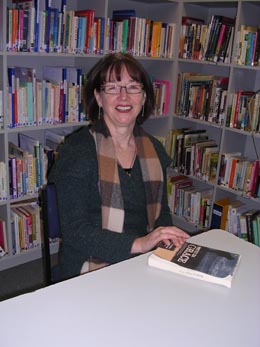 Maggie describes the sessions as getting together with “like-minded women” to talk about books and writing. She’s been volunteering at Arohata Prison for the past six years – initially talking with women about what they were reading and what they wanted to read.

“Then the book group started. It’s grown in popularity and up to eight women come along each week,” she says. “There’s a high level of participation and huge trust.”

Stories are read aloud. At the end, everyone is invited to comment and rate the stories on a scale of one to ten.

“We all read differently and bring our own life experiences to a story, and I welcome their strong opinions. I’m always amazed at the stunning reading and how very brave the women are. There’s a lot of respect for each other and no put-downs.”

Today, the book group reads Patricia Grace’s short story, Flower Girls – a story about secrets, shame, pride and incest. Most of the group rate it very highly. Two women don’t like it. They also read Witi Ihimaera’s The Maketu on Mrs Jones. One young woman, who has come along to the book group for the first time, reads beautifully but stops halfway through a page. She’s breathless, nervous. The woman next to her quickly picks up the story.

“I love the short story and I love sharing my passion for the written word,” Maggie says. “Every session is different and someone always brings a bit of magic.”

Like Alice (not her real name). She’s one of the young writers in today’s creative writing class. It’s her first time and she says she wants to be a history teacher when she gets out. When the writing class is given an exercise in writing metaphors, Alice’s images sparkle and surprise.

“Library books left in the rain like money on fire,” she reads out, then adds: “I find that books are quite precious.”

Alice says she writes by herself a lot – mainly poems. “It’s a secret way to express a part of myself. A place where I can be myself.”

The other women encourage her. “You could do NCEA ... You’re so smart ... You should see the book she’s writing. It’s amazing.”

Magic in the here and now

For Maggie, the magic is in the cross-section of women who come to her sessions: young, middle-aged and middle-class, PÄkehÄ, MÄori, Pacific Island, educated and uneducated. Within the library, they are all equal.

“I love the here and now of it,” she says. “Each week are one-off sessions and the participants are constantly changing. Sometimes they don’t want to come. Sometimes they have to do other things and sometimes, they’ve been released.That means I need to be very flexible.”

Maggie likes being a volunteer rather than being paid to facilitate the groups. “We’re all engaged in a voluntary activity where everyone’s contribution is valued. I think my strength is that I’m not a school teacher or a figure of authority. I just try to stay engaged with the written word and talk to the women as equals.

“It works, I think, because I love it. I am fascinated by their intelligence and the humour they bring to the class.”

As for changing lives, Maggie laughs. “Oh, I don’t have the ego to think that I’m changing lives. But I am changing the here and now, possibly providing some comfort to the women at this time of their lives. Some may join a book group or a writers group when they leave. I hope so.

“And maybe the moral dilemmas and cultural differences we read about will inform some of the choices they make in the future.”