Caspar Walsh's path to prison as an angry, violent, teenage drug addict was inevitable. In an article published in the Observer (May 2011), the novelist, mentor and founder of a prison writing scheme called Write to Freedom reveals how writing can lead to rehabilitation.

“My final release on bail was on the condition I go to rehab. The very real prospect of long-term imprisonment terrified me and I decided to turn my back on my destructive ways, clean up and dedicate my life to my rehabilitation. I'd seen what prison had done to my dad and I committed myself to doing anything I had to, so as to avoid repeating the mistakes he made, which eventually led to his suicide.

“As I found some balance in my life, I was encouraged by mentors to help others who had struggled with similarly dysfunctional and often violent upbringings; young people who had failed within mainstream education and ended up on the wrong side of the law …

“Over the years, I've refined a programme tailored to suit the needs of ‘kids like me’, with an emphasis on writing. During this time, I've pursued my career as a writer of plays and books. My prison writing programme is successful because I've been through much the same experience as the young people I work with.

“I know what it's like to be locked up, rejected by friends, family and society, and I know that it's possible, with a lot of hard graft, to turn your life around. My main focus is on pre- and post-release support, using writing and one-to-one mentoring to help prisoners stay out of trouble and support them – I hope – into a meaningful and productive life. 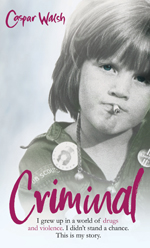 “My team and I present positive role models, something I severely lacked as a young adult.  The scale of our project is currently small; we work in several prisons in and around the south-west and Wales. We see roughly 15 to 20 prisoners every month. I have recently established a charity, Write to Freedom, and, funding permitting, this autumn will see the start of the Write to Freedom year-long wilderness and writing course based on Dartmoor.

“This course will involve four weekends focused on helping young people with the transition into adulthood. When their year is complete, students will be invited to apply for the staff training course, which can lead to paid work within Write to Freedom as well as help them with other careers …

“I've come across many young people who simply should not be in prison. Some need to be locked up for issues of public and personal safety, no doubt, but this is only a small number of the masses that actually end up inside because of a lack of community support.

“It costs £55,000 (NZ$110,000) a year to imprison a young person. A fraction of this would be far more effectively spent on keeping lesser offenders out of prison and in society, engaged in crime-reduction programmes and contributing positively to the community … ”

Read the complete article online. It also includes snapshots of four young men Caspar Walsh is working with in a young offenders' prison in southern England.

“I offer three of these stories as a counter to the negative media portrayal and wider, kneejerk moral panic around serious youth crime today,” he writes. “One story, however, is a sobering reminder that there is not a holy grail quick-fix to stop all youth crime. I have worked with these young men for several months. I set them written assignments outside of our one-to-one sessions that they complete in their cells. The idea is to get underneath the ‘front’ and swagger, and discover what it was that led them to prison. As a rule, I don't ask about the specifics of the crimes committed. Getting caught up in the details – innocence, guilt – can be an unwanted distraction.