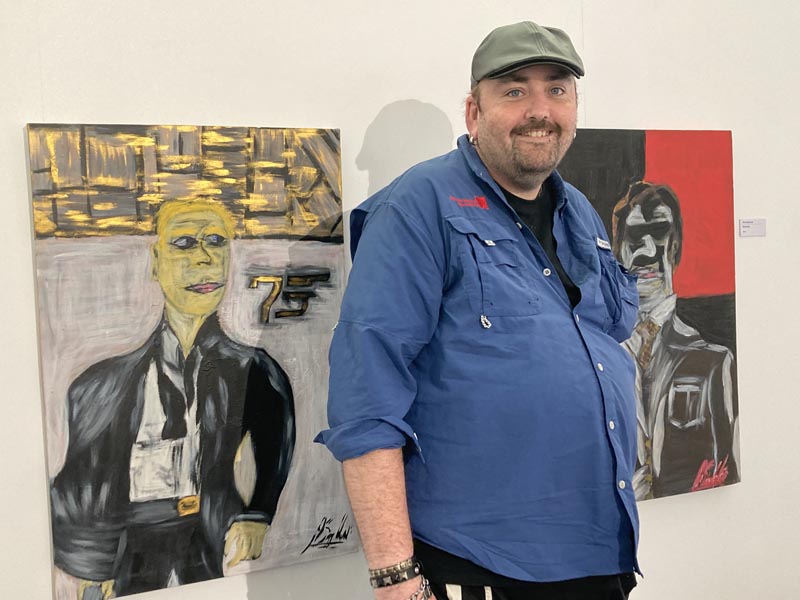 For many artists, their craft is a pleasant pastime. For others, it is their chosen career. But for some, art is an absolute lifeline – a place of calm and reflection in a life too often troubled by the storm of mental health issues.

Such is the case with local artist Phil Sigglekow, whose current solo exhibition, The Shining, takes pride of place in the street front gallery at Nelson’s respected Refinery ArtSpace.

“Art is the staple part of my life,” Phil explains. “If I didn’t have art, I don’t know what I’d do. I started to come to Magenta when it first opened. Back then I was a very unwell young man, 18 years old, with very poor mental health.”

Magenta is Magenta Creative Space Charitable Trust, now in its twenty-first year of operation. It is Nelson's only free, walk-in arts centre for people living with mental health distress and conditions such as bi-polar disorder, schizophrenia and depression.

Magenta provides a studio space that is fully resourced, offering creative and emotional support in a caring environment overseen by qualified tutors, who develop and maintain close relationships with vulnerable and disadvantaged members of the community.

Maria Anderson, Magenta’s Outreach Coordinator, explains: “Magenta’s tutors, all of whom are professional artists, empathically enable and nurture self-expression and creativity through a variety of art mediums and art-making. This includes painting and drawing, jewellery and weaving. 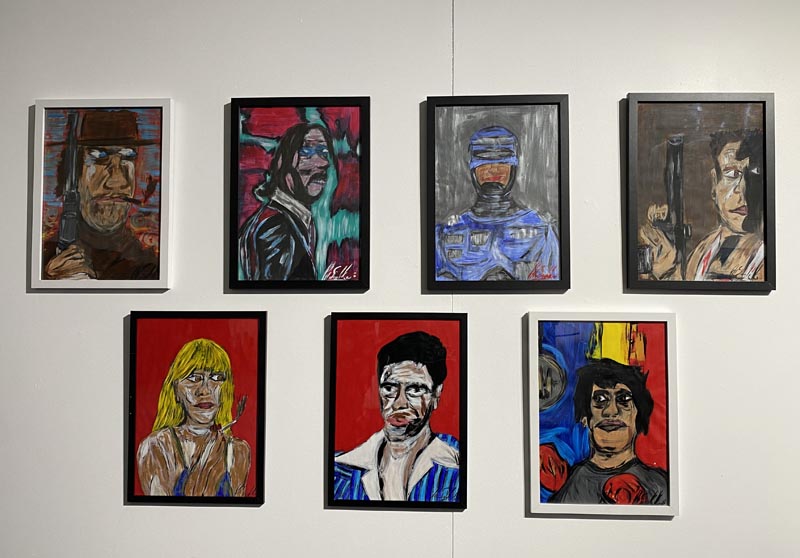 Phil is emphatic about Magenta’s value. “It's therapy for me. I feel satisfied once I've completed an artwork. It keeps me busy, and I get such a good feeling. It lifts my mood, a chance to zone out of my thought pattern and be absorbed in what I am doing.”

What Phil has been absorbed in over the past two years is amassing a full exhibition’s worth of pop culture-influenced paintings. His show’s title comes from one of the featured works: the artist’s take on the iconic close-up movie still of a deranged Jack Nicholson smiling through that infamous axe-smashed hole in a hotel door.

“In the past I’ve mostly painted superheroes,’ says Phil, ‘but for this exhibition, I moved on to movie icons. I chose the characters very meticulously, what would look good and how I can do it my way. I love to watch movies and draw the feelings of the different characters' personalities.”

The show is indeed a cavalcade of pop culture movie scenes: there’s everything from Kill Bill’s Uma Thurman to Arnie in The Terminator; Daniel Craig’s James Bond to Mel Gibson as Braveheart; there’s Bruce Willis in Die Hard, and even Marilyn Monroe.

What the artist achieves is to give each image its own unique spin and energy, captured through brushstrokes that are brisk, expressive, sometimes even wild. He doesn’t emulate his original source material, but rather explores and enjoys it, which imbues his work with an almost childlike freedom.

Phil’s faces all have a “look” – often angular and abstracted, with eyes that seem at once shifty and mischievous. It’s very much the artist’s defining stamp.

Outside the art establishment

Phil steadfastly calls himself a practitioner of outsider art. 2022 marks the fiftieth year since the art world first heard of the term “outsider art”, coined by an English art critic as an updated synonym for the earlier French notion of “art brut” or rough art, which referred to artworks created by those on the outside of the art establishment.

“I call myself an outsider artist,” Phil says proudly. “My works are mostly always portraits, abstract and original, with my own kind of cheeky take on things.

“They’re a long way from the dark work I used to do. I still deal with mental health issues, but art has made me stronger. I feel like I can cope a lot better now.”

Maria Anderson says that for many who attend Magenta sessions, it’s their only artistic outlet, and frequently the only socialising opportunity they have in their lives. The studio space offers routine and purpose to the artist's life, while enhancing their wellbeing.

“Art has saved me,” says Phil. “I feel I‘ve come a long way since I began to where it's taken me. I now have solo shows. It's come to a point that I now sell my work.

“When you sell your art, it’s a sense of achievement, that someone else likes it enough to want to buy it, it’s such a buzz.”

The Shining is on show at The Refinery ArtSpace in Nelson until 16 July. For further information on Magenta’s services phone 03 545 8498. New clients can phone, or are welcome to visit 320 Hardy St Nelson, behind old St John’s Church.