30 June 2014
Aucklander Nicola Owen, who will narrate the audio described performance of New Zealand Opera’s production of La traviata in Wellington on Sunday 13 July, has set up a company called Audio Described Aotearoa.

Nicola, who also audio described New Zealand Opera's La traviata in Auckland, says she set up her company because of the growing demand for audio description – and because she wants to make it easy for organisations and venues to provide audio description** for blind and vision impaired people.

Two key questions from organisations are “How do we do it?” and “How much will it cost?”, Nicola says.

“I can provide them with a whole package: training for staff, applying for funding, marketing to the blind community, the touch tour and audio description,” she says.

It’s a package she provided to Auckland Theatre Company this month for its audio described performance of the Maurice Shadbolt classic, Once on Chunuk Bair.

She estimates that the two audio describers (Nicola and Carl Smith) spent a total of 70 hours preparing and then presenting the audio description for Auckland Theatre Company.

“It was a lovely process and the company worked closely with us,” Nicola says. “A highlight was the touch tour, where people were able to explore the set, touch the costumes, meet the actors and hear about the characters. 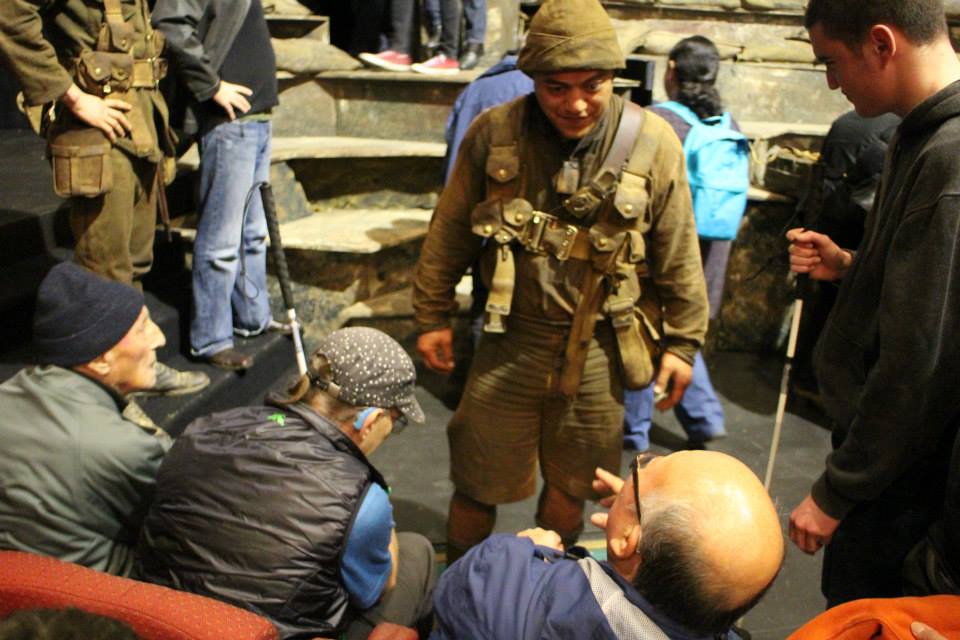 “The feedback from the 20 blind or vision impaired patrons was very positive. It was the first time that many of them had attended an audio described show and most of them planned to come back.”

For Nicola, one of the main challenges is to encourage organisations to plan ahead and apply for funding to put on audio described shows, and gallery or museum floor talks and tours. A calendar of audio described events for the whole year would help blind people plan ahead and save up for the cost of a ticket.

“What I’d really like is to get some funding to audio describe, say, six shows a year for companies wanting to provide audio description but lacking the budget and necessary resources,” Nicola says.

“It would give them the opportunity to see it in practice and then, hopefully, they would build it into their annual budgets.”

Nicola was one of six people who undertook audio description training for Auckland Live’s SIGNAL programme back in 2011. Since then, she’s audio described five shows through this programme, plus Once on Chunuk Bair and Tauranga Musical Theatre’s production of Grease. She’s also audio described three productions for New Zealand Opera.

“Before 2011, there was virtually nothing happening in New Zealand,” she says. “Now, organisations are really thinking about how to include audio description in what they do. Rather than assuming blind people won’t be interested in anything visual, they’re now thinking about how they can share the visual experience, which is such a large part of live performance.

“I think Arts Access Aotearoa’s Arts For All networks around the country are making a big difference. Members are sharing their enthusiasm, and providing support and information about where to go and what to do.”

In 2012, Nicola worked with the Auckland branch of Blind Citizens NZ to organise audio described tours of public spaces such as Cornwall Park, the Navy Museum, and the Tohuna Torea Walkway.

“I do a series of tours every year and they’re very successful,” she says. “They have sparked an interest among organisations to develop services for blind and vision impaired visitors.”

In a theatrical performance, audio description** narrates what’s happening on stage in between the dialogue or songs. An audio describer talks into a microphone to provide the commentary. This is transmitted to wireless receivers and headsets worn by the audience members.