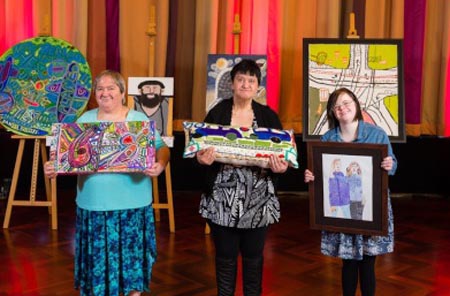 Second prize of $2000 went to Dunedin artist Becky Donovan and third prize of $1000 was won by Karin Clayden, who works from Alpha Art Studio and Gallery in Wellington. For the first time the top three prizes went to an all-female line-up of artists.

Jo-Anne started working from IHC’s Arts on High studio in Lower Hutt 18 months ago and this is the first time she has entered the competition. She likes to collect brochures – particularly ones about holidays – and this has been her inspiration.

Jo-Anne draws and paints but she prefers to do embroidery on fabric using wool. She will draw an outline on the fabric with her finger, and a tutor will follow her lead with a pen, marking the outline on the fabric. She then asks the tutor to thread the needle and then it’s all over to her to create the work.

Auckland-based judge and art consultant Tim Walker says, “The top awards went to three works that radiated that extra magic, whether that was a highly original sense of composition, a brilliant use of colour or an aspect of the way the artist had actually made the piece.” 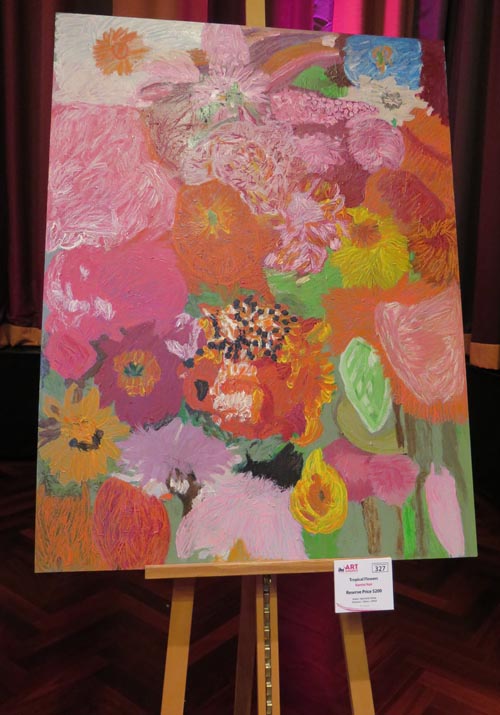 Gina Matchitt and Grant Corbishley, the other two Wellington-based judges, said that the diversity of the work presented a real challenge.

This year six-times judge WORLD fashion director Denise L’Estrange-Corbet, stepped up to the role of Art Awards Ambassador. Denise has long described the IHC Art Awards as one of the highlights of her year.

“For me it’s about the artists. It’s about meeting talented individuals and seeing their extraordinary art,” she says. “I think every artist with an intellectual disability should be encouraged and supported (if necessary) to enter.”

There were more than 400 entries in this year’s Awards, including sculptures, installations and textile art, painting and drawing. The IHC Art Awards are open to all New Zealanders with an intellectual disability, age 13 or over, whether or not they use IHC services.

The top three prize-winners were picked out of 30 finalists nationwide and announced at the Michael Fowler Centre in Wellington on Thursday 16 June. The finalists’ work was auctioned at the event, with 100 percent of the proceeds going to the artists.