Carving skills “a gift” to pass on to others 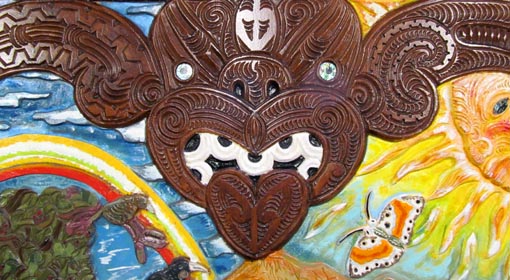 “It was total immersion for me,” says Joe (Ngā Puhi), who was released from Christchurch Men’s Prison in early October. “It was a gift to be able to use my time in prison to learn about my culture. As a descendant of the rangatira, it’s made me want to change. Why was I doing all these crimes when I should have been nurturing the treasures of my ancestors and of my children? They must be my first priority.”

Gifts to the community

Joe, who taught himself to carve while he was in and out of prison over the past ten years, has created a number of works that have been gifted to the community. 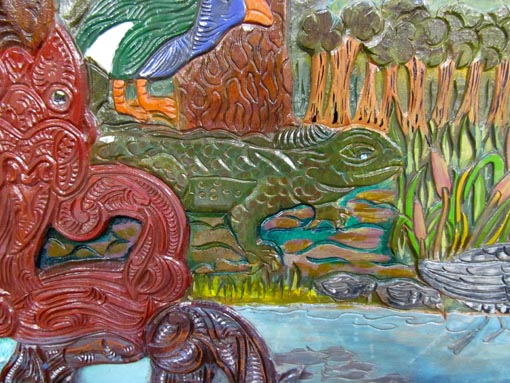 His latest is a carving donated to Pillars, a charity based in Christchurch and Auckland that supports the children and families of prisoners.

He’s now working on a carving for Prisoners Aid and Rehabilitation Trust, and says he was very happy to do the carvings for “two great institutions” that support prisoners’ families.

He was also one of several carvers who worked on a carving that was recently installed in the prison area where children can visit their fathers.

Along with carving, Joe also paints and draws. His two drawings in the prison art auction Rū Whenua Whakaaro – Thoughts of the Earthquake were sold. Held in March this year, the auction included 100 artworks by 50 prisoners across the three Canterbury prisons: Christchurch Men’s Prison, Christchurch Women’s Prison and Rolleston Prison. All of the money raised (just over $21,000) was donated to the Christchurch Mayoral Earthquake Fund.

Jen Hardy, R and E Team Leader at Christchurch Men’s Prison, says that Joe is passionate about carving. “When he talks about his carving, you can really feel the wairua. It’s amazing. He was very happy to create work for Pillars because he says they have been looking after his family while he’s been inside.”

In prison, Joe carved as much as he could – when he had the energy, the time and the permission, he says. “I’ve never done carving on the outside but for me, it’s a huge step forward and it’s an industry where I plan to earn a living.”

Now on probation for six months, Joe wants to focus on his carving and on increasing his skills. “It’s a gift I want to keep developing. There are always greater heights to climb and I see myself simply as a tool producing these gifts from times past. It’s something I would like to pass on to others if I can.”

Along with his carving, Joe is writing and illustrating a story about eels and how they migrated into Lake Omapere in the Bay of Islands – the area where he grew up.
“The story is about the importance of leaving a legacy of names – the rivers and creeks the eels travel up to reach Lake Omapere. It’s a beautiful story and I’m only halfway through. But I’ll get there.”

When the story and the illustrations are completed, Joe would like to donate it to Maori Television so it can be read to children in te reo Māori and in English.

As part of his reintegration, Joe is keen to connect with other carvers in the community and local marae. He also wants to hone his carving by attending courses and wānanga.