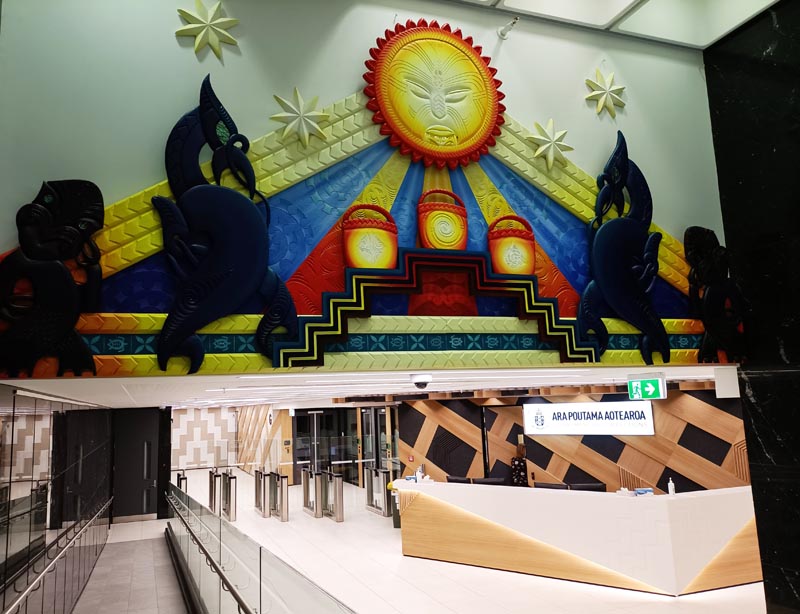 As well as showcasing the prisoners’ creative skills and talent, the 11 taonga serve as examples to visitors of the work Corrections does to rehabilitate prisoners.

Sharon Hall, who has been managing the prison art and creativity programme at The Learning Connexion for the past 16 years, was contracted by Ara Poutama Aotearoa in October 2020 to commission the pieces and also set up an exhibition space in the reception area.

“It was incredible to be a part of such an authentic process from the projects’ inception and creation to the handover, installation and subsequent unveiling,” Sharon says.

“The commitment from the artists was outstanding and they had an obvious passion to create something that will stand the test of time. They were also meticulous in their craftsmanship. The taonga came with a rich narrative that enhances the office space for both staff and visitors to the building.”

There’s also a rotational exhibition space in the reception area, featuring 20 works by men in Whanganui Prison who attend weaving workshops led by tutor Juanita Davis. The exhibition will continue until August 2022.

Te Whiti o Te Rā is a large mural that hangs above the entrance to Mayfair House. Incorporating the sun, it was made by men in Auckland South Corrections Facility. The artist statement says: "The overall feeling we wanted to evoke when entering Mayfair House was the sensation of the sun on your face. This is a symbolic gesture as it alludes to moving out the darkness (or mist) and into the light ... "

Collage above, from left:

He Pitau Whakarei, made by men in Tongariro Prison. The artist statement says: "He Pitau Whakarei symbolises leadership, courage and strengthIt was chosen to provoke conversations that will give hope to many who have made the wrong choices, who took a ride on the wrong waka ... "

Oranga Ake, made by women in Auckland Region Women's Corrections Facility. The artist statement says: "Our intention is to represent the connection to Te Ao Wairua (The Spiritual World) and Te Ao Tūroa (the Natural World) ... "

Te Ringa Kaha, made by a man in Otago Corrections Facility. The artist statement says: "I have pulled together a variety of design elements to represent the guidance that is shown by the Department of Corrections ... "