A six-metre high poupou and a large carved panel, created by prisoners at Auckland Prison, was blessed at Albany Junior High School on the North Shore this month. 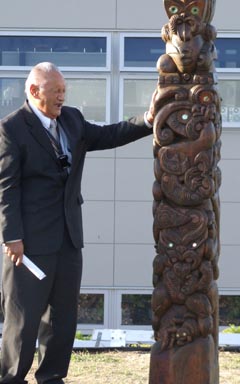 The blessing by the prison chaplain, kaumatua Wally Hayward, took place as the sun was setting on the man-made hill, Te Tihi-o-Tui, on the school grounds. It’s here that a waharoa (gateway), also carved by the prisoners, was presented to the school and unveiled by Prime Minister John Key at a ceremony in March 2009.

The carvings are part of a ten-year project led by students, dating back to 2006 and looking to the past to enhance the future and provide a sustainable school community.

Albany Junior High School, which opened in 2005, is sited where there was once native forest, then orchards. Birds are important to the school’s heritage and the waharoa welcomes birds migrating from Tiritiri MÄtangi to the Waitakere Ranges.

“We hope the birds  will fly down and eat the fruit and nectar provided by the trees that the students are continually planting, before continuing their journey,” says teacher John Cluett. 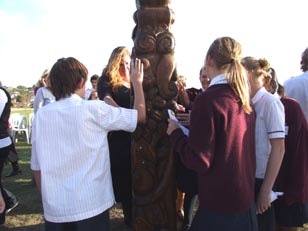 The school’s kaumatua, Matua Des Ripi (also Senior Adviser, Kaumatua, MÄori Services, Department of Corrections), inspired the students with his stories of the forest, the birds and the sky. He asked them how they could welcome the birds to the school and their response was to carve a waharoa.

Des and the students talked to carvers in Auckland Prison. The students shared their concept with the men and together, they agreed on what would be carved.

“There’s a MÄori proverb, ‘Ma te huruhuru ka rere te manu. With feathers, the birds are able to fly’,” Des says. “With resources – parents, community, school – we are able to motivate people to fly and move forward. This same message applies to the carvers. It’s as though they have been given feathers to fly.” 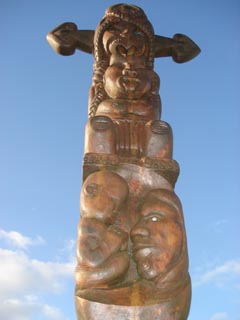 The carvers’ work will be included in an exhibition at Mairangi Bay Art Gallery, opening on 12 June. Along with the carvings at Albany Junior High School, the men also carved two poupou for the entrance into the Albany District Court.

Last year, Mark Lynds, Programme Manager for Auckland Prison and Northern Regional Corrections Facility, took up the project and worked with the prisoners to create the poupou.

The poupou and carved panel were designed by the students to sit in the centre of the hill and cast a shadow around the space during Matariki. This involved the students in researching Matariki and its relationship to traditional planting practices.

The students are passionate about the space, the stories and the carvings. Every year, they plant 500 trees and lay 30 or 40 cubic metres of mulch.