Reaping as they sew

Hundreds of inmates in prisons throughout the United Kingdom are finding solace, and learning important skills, from an unlikely creative source: needlework. 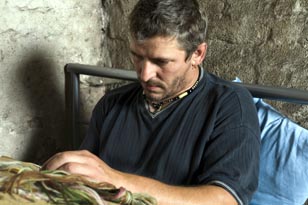 Eighty per cent of the stitchers associated with the Fine Cell Work social enterprise are men. The group operates in 26 prisons in the United Kingdom, all of its classes have waiting lists, and scores of other prisons have asked to be involved but the group hasn’t the resources to cope.

Fine Cell Work was founded by the late Lady Anne Tree, who came up with the idea in the 1960s when she was a prison visitor. With the help of the Royal School of Needlework, she helped two prisoners serving life sentences to make carpets, which were then sold as collector’s items in New York.

Today the group has more than 50 volunteer instructors teaching needlework to more than 400 prisoners. Fine Cell Work’s mission is to rehabilitate prisoners by giving them the opportunity to earn and save money and the chance to reflect on and rebuild their lives through craft and achievement.

In a recent interview for a quilting blog, Fine Cell Work design co-ordinator Elena Hall said many prisoners are initially drawn to the programme as a means to earn money, “but they very soon develop a love of the craft and come to depend upon it to pass the time during the 18 hours on average that they spend locked in their cells”.

An inmate from Petershead Prison said the needlework was one of the few things he could do in prison that had a purpose, was creative, constructive and had a point.

“It also helps me to earn money to buy stamps and phone cards to keep in touch with my family.”

“It has therapeutic effects which reduce incidences of breakdown and self-harm, promoting overall mental health.”

An inmate from Kingston Prison credited the needlework with reducing his violent streak.

“I used to be down the block all the time, but when I started doing Fine Cell Work I stopped getting into fights. I haven’t been in a fight in two years.”

The work also requires basic numeracy and literacy skills, and can motivate inmates to seek further education while in prison.

Fine Cell Work recently starting working with two former prisoners who were continuing to quilt in their spare time, and one working to start his own soft furnishing business.

“We have also worked on a collaboration between a designer and a former prisoner to develop a contemporary screen-printed quilt with an interesting flying-birds design,” said Elena.