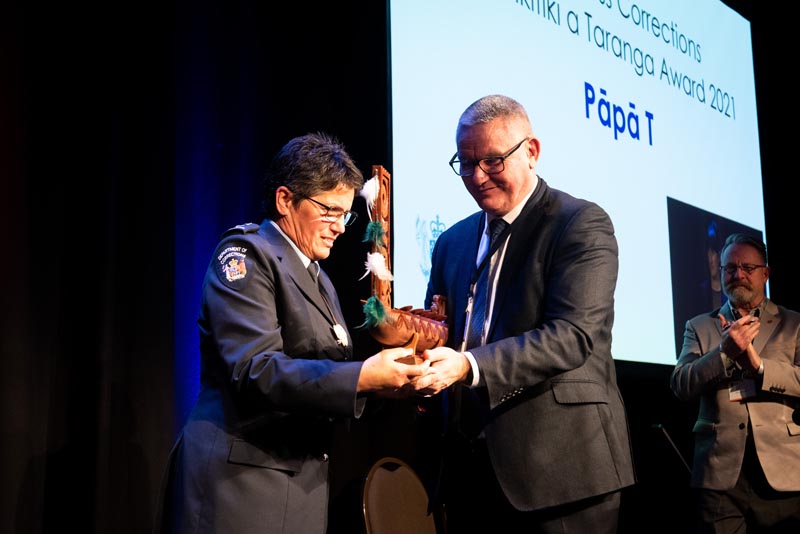 Tipene Rangihuna (Ngāti Porou) was retired and happily spending his days breaking in wild horses when he agreed to teach a te reo Māori course for the Eastern Insitute of Technology at Hawkes Bay Regional Prison.

He thought it would be a short-term thing, just a couple of hours a week for 10 weeks. But it turned out to be a 13-week, fulltime course and almost seven years later he’s still teaching it five times a year. The man who is known universally as Pāpā T is now a much-loved figure at the prison, where he combines Level 2  reo Māori lessons with learning how to handle a taiaha. 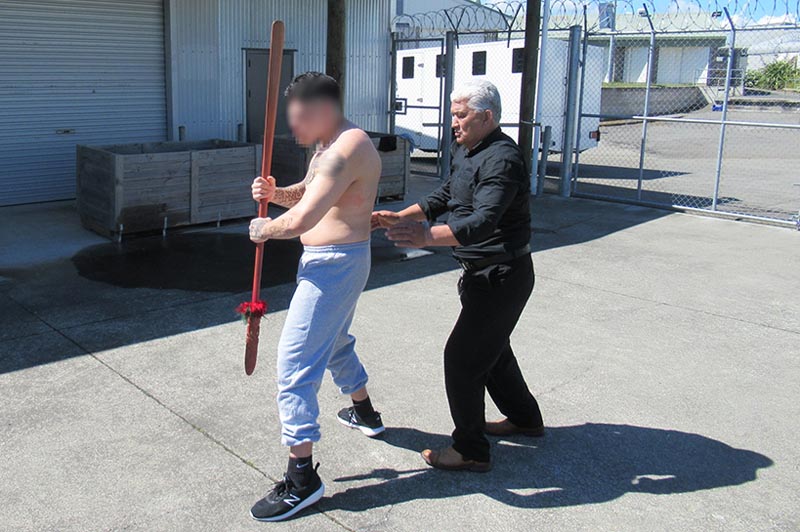 “I say to everyone that I went to EIT for a job and they sent me to prison for life – for seven years, which is about as long as a life sentence,” he says with a laugh.

A native te reo Māori speaker, Pāpā T had previously spent many years teaching in kōhanga reo and kura kaupapa, where he combined his language skills with his expertise in mau rākau (traditional Māori weaponry) and the taiaha in particular.

During the 13-week course Pāpā T, who is now 70, works with tāne from the high security block, using taiaha as a hook to help them learn their whakapapa and develop their reo skills so that by the time they graduate they can confidently recite their pepeha, sing waiata and say a karakia in front of a group.

“I teach it all in Māori,” he says. “I tell them they’re learning the reo so that when they leave prison and go to their own marae they can stand and speak in the reo. They need to be able to do that because eventually the old people who are doing it now will pass on.”

Deeper connection to their Māori heritage

Each class has 10 tāne, and by the end they are not only much better reo Māori speakers – and a lot fitter thanks to their taiaha training – they are also much more confident and feel a much deeper connection to their Māori heritage. 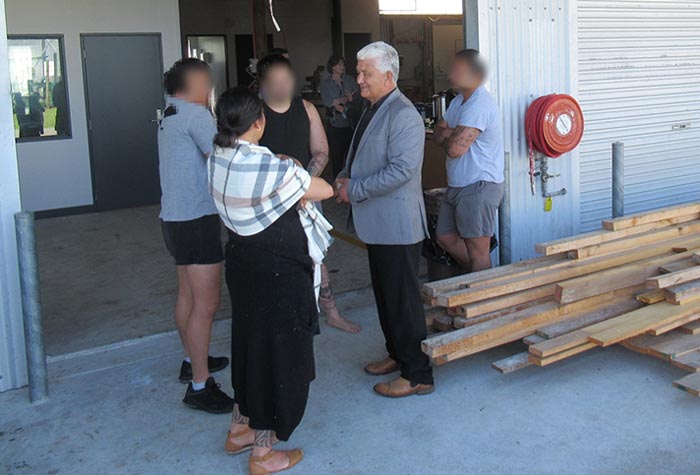 As a result, some of the men have moved out of high security to low security units, where they’ve had access to therapeutic approaches and interventions that mean they can leave prison early.

“I have witnessed the transformational change in Pāpā T’s learners and personally experienced his ability to nurture, guide and encourage learners, their whānau and staff within culturally new and challenging experiences,” says Marylou Sloane, the Department of Corrections’ Practice Manager for education and training.

Pāpā T’s contribution to Hawkes Bay Regional Prison was recognised at  Te Putanga Toi Arts Access Awards 2021 on Monday 5 July, when he received the Arts Access Corrections Māui Tikitiki a Taranga Award for an individual who demonstrates the qualities of Māui (innovation, creativity and leadership) and provides arts programmes in a New Zealand prison that reflect cultural inclusion and diversity.

Epitomising the qualities of Māui

In their comments the judging panel said: “Papa T epitomises the qualities of Māui: innovation, creativity and leadership. His influence extends far and wide across Hawkes Bay Regional Prison, using te reo Māori as the initial tool for engagement with the men. His commitment, community links, skills and knowledge are exceptional. He is the embodiment of rangatiratanga and excellence, the bearer of light and hope in creating transformational change and strengthening te ao Māori worldview. Thank you, Pāpā T!”

Pāpā T’s own interest in taiaha came from when he was supervising a group of young boys on a week-long trip to Mokoia Island in Lake Rotorua more than 30 years ago.

He decided that rather than helping in the kitchen he’d join the taiaha classes. At that point he already had a black belt in karate and he was struck by how similar Māori and Japanese martial arts are, particulary the spiritual beliefs that underpin them.

“The two cultures run side by side,” he says.

At Hawkes Bay Regional Prison, the tāne practise their taiaha skills using a broomstick first, learning how to treat it properly: no dropping it or stepping on it, and no swearing, eating or drinking when you have a taiaha in your hand.

Respect for others and for themselves

They eventually move on to using the real thing. The result is a much greater respect for others – and for themselves.

“That’s the amazing part – how much better they feel about themselves,” Pāpā T says.

He says whānau members often cry when they see the transformation that has taken place at the graduation ceremony.  The tāne themselves also recognise that they have changed.

“The main thing I hold on to and remember from doing Pāpā T’s course is he taught us that whenever you are doing anything in the realm of te ao Māori – haka, waiata, whaikōrero, karakia and whakairo and so on – your ancestors are with you,” writes one tāne. “They are standing behind you and giving you strength, knowledge and  wisdom, encouraging you and backing you up.”