Lights up! A musician is playing a guitar. A table centre-stage has a paper sign on top of it reading “Probation Officer”. Pamphlets promoting different social services are scattered on the table where two men are sitting. 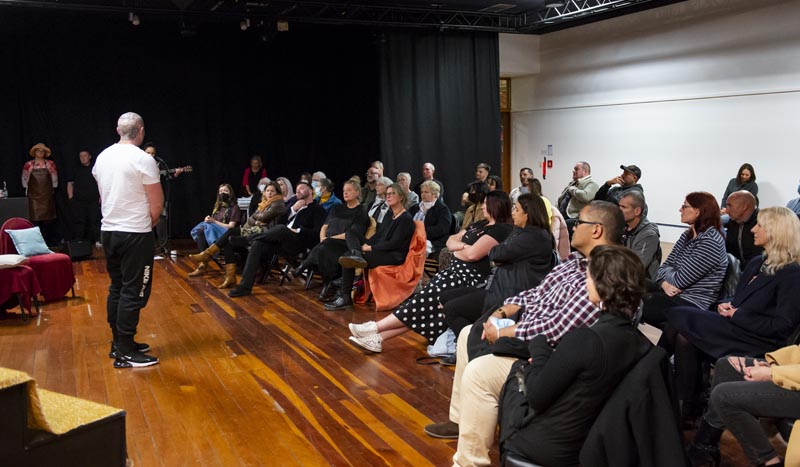 One of the men is holding a clipboard and asks, “How have you been going? You’ve been doing really well with your rehab programme.” The other man (the main character) nods, not sure whether to tell him how he really feels.

The play moves into a series of scenes where the main character interacts with other characters (e.g. mother, girlfriend, boss) to reveal his journey into prison. Then on release, how he overcomes obstacles and tries his best but ends up back in prison.

I’m watching a play called Been Through Enough, performed by the Happy You…!! theatre company in Dunedin. This company is made up of people who have been involved in the justice system, including former prisoners who took part in the Forum Theatre programme at Otago Corrections Facility and are now in the community.

A platform for people in the justice system

The actors devised and rehearsed this play, which speaks to issues around rehabilitation, reintegration and recidivism. It’s a great example of how the arts (e.g. theatre, music, exhibitions) provide a platform for people in the justice system to voice their concerns and fears. We need to listen to them! 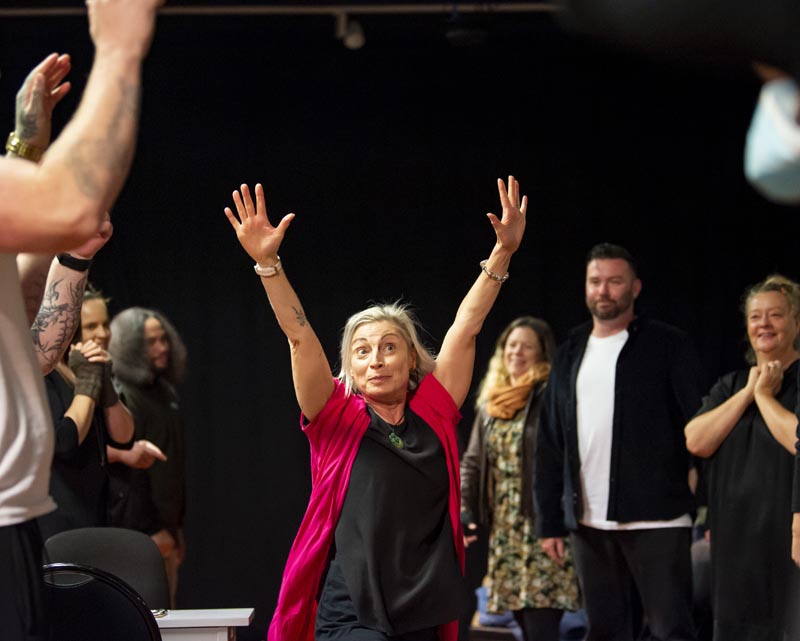 Director Ruth Carraway and producer Kim Schiller worked with the actors to develop the play further, initially created for the Dunedin Fringe Festival in March this year but postponed till September because of COVID-19.

Forum Theatre was developed in Brazil by Augusto Boal in the 1970s to highlight social issues among communities. It has other names: “Theatre of the Oppressed” and “Theatre for Development”.

This type of theatre aims to help audiences understand the characters’ issues and oppressions, which are usually centred around a contemporary issue: in the case of Been Through Enough, the focus is on re-offending.

This theatre technique is a highly appropriate acting method for the company. A scenario is presented, following the main character’s story. Then the scenario is repeated but audience members are allowed to call “Freeze” at any moment.

Making a case to change direction

As an audience member, I really enjoyed watching these issues play out in this format. There was a certain distance between the characters and audience members that meant “change” was done safely in the space.

I was also aware of the multiple layers at play, including the fact that some of the actors are former prisoners, who draw on their experiences and present them as a representation rather than personal stories. For me, this provided a distance where I could view the story objectively. Rather than watching it as personal trauma, it became a play about societal issues.

It  reminded me of the play-within-a-play technique that existed in Elizabethan times, made famous in Hamlet’s famous scene of the play The Murder of Gonzago, where actors do a rendition of the Old King’s death (i.e. Hamlet’s father). Like Hamlet, this play makes us question what we could do to change the narrative.

Courage and openness of the actors

At the end of the play, audience members were invited to give feedback. It was a really positive and insightful discussion, and I admired the courage and openness of the actors.

Some in the audience said that prisoners and Corrections staff should see this play. I also believe many other people would benefit from seeing it because it provides honest and real insights into why people end up in prison and then re-offend when they're released into the community.

The actors played to a sell-out season. Congratulations to all the members of Happy You…!! theatre company, Ruth Carraway, Kim Schiller, the acting troupe and musician Annah Mac, who stepped in at the last minute to provide the beautiful, thought-provoking music.

I am really looking forward to their next production and urge them to think about touring the show nationally. Surely there must be some funding source for this important theatre!