15 September 2020
For the first time, Te Putanga Toi Arts Access Awards 2020 will be presented online instead of live on Tuesday 13 October. With the ongoing uncertainty surrounding COVID-19, Arts Access Aotearoa has decided to go digital so it can be sure the  ceremony can be presented.

Te Putanga Toi Arts Access Awards celebrate the contribution of individuals, groups and organisations in providing access to and inclusion in the arts. They also acknowledge the achievements and contribution of a New Zealand-based artist or writer with a physical, sensory or intellectual impairment, or lived experience of mental ill health.

Richard Benge, Executive Director of Arts Access Aotearoa, says Te Putanga Toi Arts Access Awards play an important role in profiling excellence and leadership in the arts and disability sectors. They also highlight leaders in the use of the arts as a tool supporting the rehabilitative process of prisoners and their reintegration back into society on release.

"We’re excited about to present the awards differently this year and make the most of the opportunities to reach a much wider audience," he says. "Rest assured, we will be celebrating and promoting the recipients of the Arts Access Accolade and six award recipients as much as ever."

Arts Access Aotearoa has employed Multi-Media Systems to create and produce a prerecorded video. It will be sign interpreted and captioned, and an audio described option will also available. It will also be streamed on Facebook.

There will be regular updates on this webpage in the build-up to the awards ceremony. The online event will also feature on this page, starting at 6.30pm Tuesday 13 October and celebrate the recipient of this year’s Arts Access Accolade and the six award recipients. 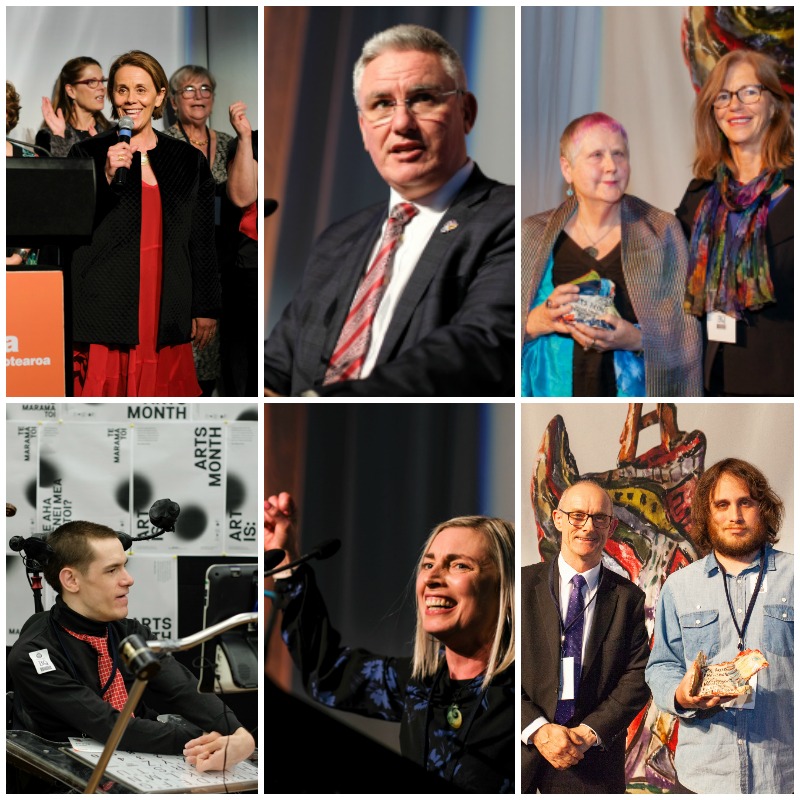 CELEBRATING ACCESS AND INCLUSION IN 2019: Hon Kelvin Davis hosted Te Putanga Toi Arts Access Awards 2019 in the Grand Hall and Banquet Hall at Parliament. This collage of images includes some of the recipients and also Thane Pullan, who co-MCed the event with Richard Benge and Prudence Walker.

The Arts Access Accolade is chosen by Arts Access Aotearoa’s staff and board. It’s presented to an individual who has worked closely with the organisation, inspiring and helping it achieve its vision of a society where everyone in Aotearoa can access and participate in the arts.

The other six awards are selected by judging panels. The awards to be presented:

+ Text Size -
Do NOT follow this link or you will be banned from the site! Original generation time 5.0460 seconds. Cache Loaded in: 0.0005 seconds.