Inclusiveness is a tricky word. It tends to suggest that I’m including/inviting you onto my ground. If we’re serious about inclusiveness, we may find that the ground itself changes radically.

For several years I taught at a small rural high school in Canada, where I was asked to do an anthology of students’ writing. The easy option was to do the anthology with the smart, able students in my creative writing class. But I decided that all 250 students in the school would have some writing in that anthology. And the writing had to be good. And that’s what happened. If you give people small goals and set them up to succeed, they can write.

The pay-off was large. This group of kids, mostly from farms, discovered that they could write and became interested – not only in writing but in reading too. One 17-year-old told me she had just read her first book.

Those who wouldn't come

Fast-forward twenty years. I did the creative writing course at Victoria University when it was an undergraduate course. Doing the course made me interested not so much in who came to a writing course in a university, but in who wouldn’t or couldn’t come. In 1990 I had a Churchill Fellowship to Canada and the UK to look at access to tertiary education for disadvantaged groups, but I also looked at creative writing programmes. 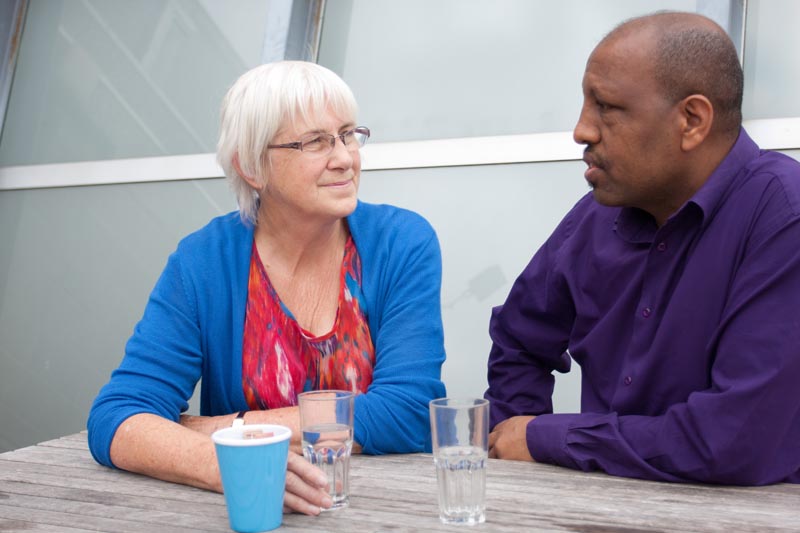 Then, in 1993, I founded the Whitireia Creative Writing programme.

I come from an academic background but I knew there were many people who for various reasons wouldn’t take a university course. I was interested in locating a creative writing course in a polytechnic, with more accessibility, and greater accountability to the “working world”.

The programme now comprises a degree, several full-year courses and a number of online courses. Every year we take a chance on some students who might not be otherwise accepted. And here’s an important point about inclusiveness: It’s hard work and it means taking risks. We know that those students will need extra time and support. Sometimes the risks pay off, sometimes they don’t.

I’ve edited several books by writers from a range of ethnic groups. Each book has been a big editing job. But if we want to see those writers in the literary landscape, that’s part of the deal.

So why is inclusiveness important? We all know the narrative of New Zealand writing, how Māori were absent for so long and the importance for Māori readers of discovering themselves within literature. Then the slow emergence of Pacific Islands writers. And while writers don’t necessarily set out to represent their cultural backgrounds, they often write because they want to see themselves in the landscape or want to carve out their own literary territories.

This encourages reading and readers and makes both writers and readers important contributors to the wider society. That’s powerful stuff. But where are the Indian writers, for example? Indians are one of New Zealand’s largest ethnic groups, and have been in New Zealand since the early 1800s. There are a small number of writers of Indian ethnicity but as a group they are under-represented in New Zealand’s literature – though not in other countries. The major sporting codes are collaborating on initiatives to encourage greater ethnic diversity and participation in sport. Imagine if that happened in the writing arena!

Let’s look at the latest kid on the literary block, the Academy of New Zealand Literature, established in 2016. Does it represent the current face of New Zealand literature? For a start, the name “Academy” places it in a traditional European context. I browsed through the list of members and was surprised at some of the omissions, and equally surprised at some of the inclusions. The more I looked at it, the more it felt like King’s “club”. Of course, there are plenty of clubs like that, not only literary – exclusive (by invitation only) and existing to provide privileges for members. They generally maintain the status quo and run the risk of being irrelevant to everyone else.

The world of the Academy, and of “gongs, awards, and prizes” (King again) is a part, but only a part, of a much bigger writing world.

Let’s go back to inclusiveness. What if there’s an organisation whose brief is to really light a flame for “literature” in all its forms among the general public? An organisation that gives awards for mainstream good-reads, for zines, for graphic novels, best blogs, for best fiction written by people in New Zealand less than ten years old, for best story delivered on an iPhone. That celebrates commercial success. That looks at what people read when they travel on trains and thinks seriously about that market – and promotes books in trains! That encourages innovation in writing and reflects readers in the digital age. An organisation that represents the real face of New Zealand – one of the world's most ethnically diverse countries.

The momentum of change

I can’t see an umbrella organisation like that happening. Inclusiveness needs a lot of resources, including money. And King believes the funding structure is at the heart of the problem. But that’s not the end of the story. There are lots of individual initiatives around the country (and from organisations like New Zealand Society of Authors) that are inclusive and innovative, and maybe that’s where the momentum for change lies.

Where does all this leave someone like me? I don’t feel a part of the “literary community”. When I say this to other writers, it’s interesting how many writers say they feel the same way – writers who I certainly wouldn't expect to say that.

Does it bother me, being an outsider? Sometimes. But mostly not. I see myself as a productive part of that much larger writing community. I’ve made a living as a writer (among other things, working for ten years as a writer at Te Papa). I’ve published 14 books, with a range of great publishers. I’ve had the opportunity to establish an innovative writing programme whose graduates have produced over 220 published books and major scripts. I’ve been part of setting up Escalator Press with a brief to produce books offering new voices and new perspectives. In the last few years, I’ve participated in writing projects in Malaysia and Indonesia. Working on those projects in Asia, I felt as though all my skills and experience were valued.

That’s a rare thing. If I’d followed a more literary career, I might have had other opportunities and more recognition. But I wouldn’t have had many of these opportunities. There’s a huge amount of dynamic energy in the larger writing world, waiting to be tapped into.

Inclusiveness is about a generosity to good writing wherever it occurs. And good writing is good writing, regardless of whether it’s in poetry for children, in a blog, or in a memoir. As a teacher, I want to say to students: whatever you write, your job is to write it absolutely as well as you can. Don’t buy into any notion that good writing is the preserve of universities, or of a particular kind of poetry, or of literary fiction. Just write well.

+ Text Size -
Do NOT follow this link or you will be banned from the site! Original generation time 2.1467 seconds.