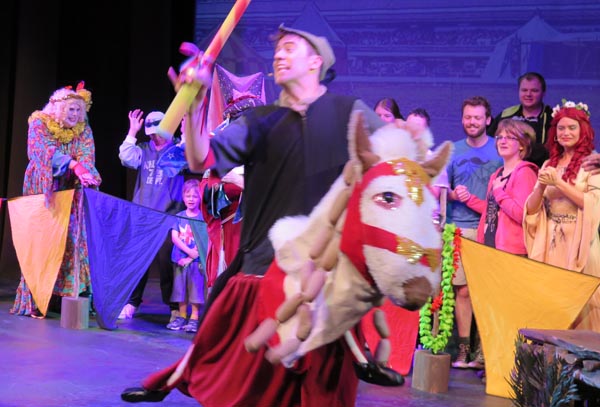 When Mother Hood invited the audience to come on stage to watch the jousting tournament between Robin Hood and the sheriff, there was an instant and glorious rush to the Circa stage.

The audience cheered when Robin Hood won Maid Marion’s hand and booed the sheriff at Circa Theatre’s relaxed performance of its summer pantomime, Robin Hood. It included between 100 and 120 young people from centres such as Kimi Ora School, Alpha Art Studio, and Active Youth, a branch of IHC’s IDEA Services. 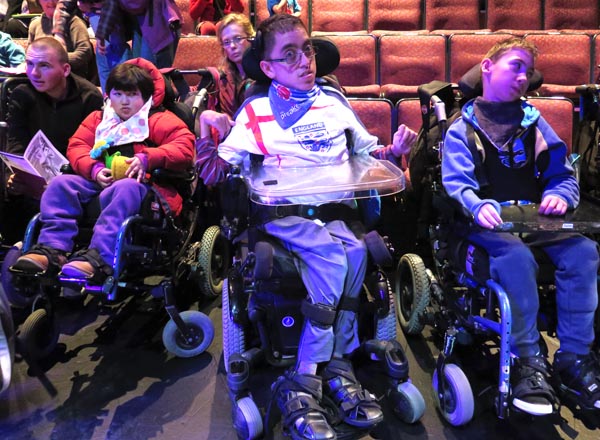 This was the first relaxed performance of live theatre in New Zealand – with another happening at 2pm on Saturday 12 December. So what does it mean? It means the show has been adapted to meet the needs of people with a learning disability and people on the autism spectrum. There’s less intense lighting and fewer loud noises. Audience members can walk around the space and make noise. And it’s not rude to leave the theatre and take time out in a quiet space.

Naenae’s Kimi Ora School brought 36 children, many using wheelchairs. It was a touching sight when the wheelchair users filed into the auditorium and filled the front row. Has this ever happened before in a professional theatre in New Zealand?

“We’ve been to shows before but none specifically for us. We could make a bit of noise and leave the theatre without people getting grumpy,” said Jess Hall, Deputy Principal. “It was a new experience for a lot of the kids and some of them had to come in and out but it was great to be able to do that. It was brilliant.”

The icing on the cake for Adrian, who attends Active Youth, was returning to the theatre after the performance to collect a jacket he'd left behind. Some of the actors were relaxing in the bar. "Thank you, thank you. The performance rocks. You rock," he told the actors, a beaming smile lighting up his face. Sometimes, it pays to forget your jacket!

Liz has a ball

As for Liz, also from Active Youth, she had a ball. She got to go on stage during the performance, first to try out Robin Hood’s bow and arrow, and then to take part in the jousting tournament. 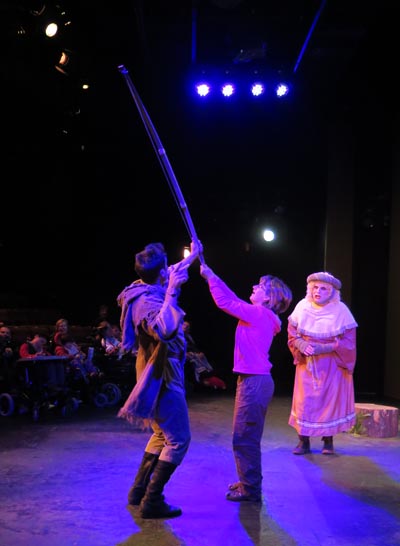 Throughout the performance, Liz would regularly say in a loud voice, “Excuse me …  Excuse me … ” But that was just fine.

None of the four people from Alpha Art Studio in the audience had been to the theatre before and returned to Alpha with big smiles and thumbs-up. Rohana Weaver, its Community Support Worker, had prepared them for the show by talking them through the information pack that Circa had prepared and sent to them in advance.

The pack included photos of the theatre spaces and the actors in their characters. There was also a summary of each act, which included opportunities for audience members to participate (e.g. clapping, booing, cheering, chanting, going on stage), musical moments and any potentially scary moments.

Responding to the panto gags 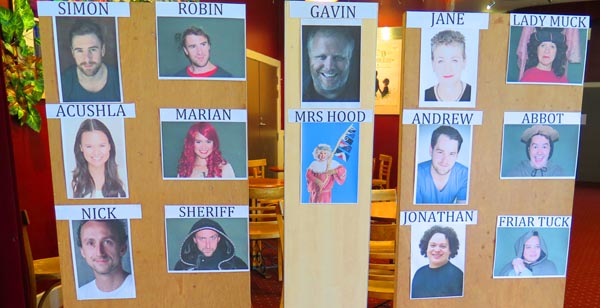 Mother Hood: The government will give you $1000 if you open up KiwiSaver.

Robin Hood: Oh no, they won’t.

Mother Hood: Oh yes, they will.

Robin Hood and audience: Oh no, they won’t ... etc

They loved Mother Hood, played by Gavin Rutherford. In fact, they loved all the actors - even the baddies. At least one audience member was disappointed not to be able to get their autographs.The thing is, they all responded in different ways. For some, the two-hour show may have been too long. For others, it was perfect. The advice from an Autism New Zealand representative who had seen the show earlier was there was no need to shorten the show.

The actors did a sterling job, adapting easily to a vocal and mobile audience. So too did the four ushers. Congratulations to everyone involved and to the IHC Foundation for its grant to make these two relaxed performances possible.

There's a second relaxed performance at 2pm on Saturday 12 December. Tickets cost $10 for adults and $5 for children. For more info and bookings: http://bit.ly/1N5jyLt